Since the introduction of the Hull Series back in April 2015, every new concept ship reveal has had an accompanying Q&A post, where we spend a couple days collecting questions from you, pass those on to the relevant ship designer, and provide you the best answers we have available at that time.

With the addition of Spectrum earlier this year, we can now allow you to add your vote to the questions you most want to see answered. The questions included below are a combination of those that received the most votes, similar questions that were merged into a single instance, and those we felt we could comfortably answer at this stage in the Tumbril Cyclone’s life.

As the Cyclone is only in concept stage, there are still some unanswered questions we’re currently pursuing in development. As the game continues to be fleshed out, those missing answers will be determined and implemented. While it will still be some time before we see the Tumbril Cyclone in game, we hope you’re as excited as we are as the game expands with the addition of another ground-based vehicle to the Star Citizen universe.

As always, a special thanks to Stephen Hosmer, Ben Lesnick and Steven Kam for their help in answering your questions.

What ships will the Tumbril Cyclone fit into?
The concept model is currently sitting at 5.71m x 3.25m x 2.26m, but as with everything in Star Citizen, its size is subject to change as it is built out and implemented in game. At present, this makes the Cyclone smaller than an Ursa Rover but larger than a Dragonfly or Nox. Our current intention is that anything that fits an Ursa will fit the Cyclone, including the Constellation. For ships like the Cutlass and Freelancer, it may technically fit in their cargo bays, but because the ramps are tapered, a Cyclone would likely not be able to load up into it.

Are the Cyclone variants “modular?” Can we just swap the boxes out on the base model to make the variants?
While this system is not currently available in game, it is something we’re interested in exploring once that time comes. When the Cyclone is added to the game, we expect them to function as variants for the time being.


How much cargo can it carry?
Currently, the base version of the Cyclone is set to carry 1 SCU of cargo.

What can be picked up by the Cyclone RN’s scanner? People? Buildings? Derelicts? Loot? Ships?
As with all scanner systems in the game, it will pick up anything with a detectable signature, such as IR or EM. The difficulty of picking up that signal will depend on the item’s output and your equipment. It wouldn’t tell you if there’s a derelict or loot around the corner, but it should be able to tell you that there’s a large structure in the distance and it’s up to you to decide if you want to go check it out.

That said, the RN’s upgraded radar system will have a longer range and better detection capabilities than the standard Cyclone, along with data banks to store a larger amount of scanned data to help with the mapping of a planet’s surface.

How fast can the Cyclone and its variants go and how do they compare to the Ursa and Lynx rovers in terms of speed and acceleration?
We don’t have specific numbers yet, as the Cyclone is still in concept, and this will come with game balance and tuning, but it should be faster in speed and acceleration than the Ursa. We’re aiming for it to be about twice as fast as an Ursa and the RC version will be even faster than that when boosting.

Will it launch with 3.0?
The Cyclone will not launch with 3.0. Backers with a Cyclone on their account will receive an Ursa loaner vehicle until the buggies are completed in a future 3.x patch.

Can a Cyclone end up on its side or roof? If so, how do we right the vehicle post-accident?
The Cyclone features jump-jet thrusters meant to stabilize the vehicle when it becomes airborne. These will attempt to correct any deviation in the vehicle and provide a softer landing. Despite this, it is possible that your Cyclone could find itself flipped, turned upside down. Should this happen, we recommend you take a minute to sit right there, tell everyone how you became the prince of a town called Bel-Air… and then get out and lift.

Is more protection for the exposed driver being considered for the combat versions, or will a cockpit shot be a one-hit kill?
The Cyclone is equipped with vehicle shields to protect the occupants from enemy fire. More info on these shields will come when the Cyclone is implemented in game.

What are the pros and cons of the Cyclone compared to other land vehicles when it comes to terrain, handling, speed, utility, and combat?
The Cyclone is meant to be in the middle of the road between the Ursa and the Nox. The Ursa is slow and sturdy, and the Nox is fast but less rugged. The Cyclone aims to strike a favorable balance with a tough vehicle that also can’t be discounted in the speed department.

Additionally, it should handle most any terrain using its articulated treads to increase its grip. The Cyclone has four-wheel steering which gives it better stability while maneuvering at high speeds and a decreased turning radius at low speeds. Of course, its utility and combat effectiveness will depend on the skill of the driver, and the version you bring with you.

Will the co-pilot of the cyclone be able to shoot their personal weapons while seated?
This is functionality we intend to add to the game. We have no ETA for this feature at this time.

Is the Cyclone protected by a shield?
Yes. Details on the shield are included in a previous answer.

Can the Cyclone pull a trailer?
Currently there are no plans to implement trailers in the game. If this changes in the future, the Cyclone would be an appropriate candidate for hauling one around.


Can we re-arm missiles in Anti-Aircraft variants in field conditions?
The missile racks are the same racks already in use on ships and thus would need to be re-armed in the same way. We’ll have more details on how that functionality will work when the time comes.

Can the hubs inside the wheels move from the bottom we’ve seen in pictures to the top to give more ground clearance?
Unfortunately, no. At present, we have no plans to add any functionality like this, but the articulated treads can be deployed to increase traction at the cost of speed.

The Cyclone being a wheeled vehicle and all, will it have less of a detectable sig vs. a hover bike like a Dragonfly or Nox?
The Cyclone uses similar Vehicle-class parts as the Dragonfly and Nox, making its EM signature very similar, while it’s IR signature should be significantly reduced as it is not equipped with as many thrusters and Grav-Levs that can run hot if not managed properly. Then again, if you’re racing around and pushing the Cyclone to its limits, you may get noticed. 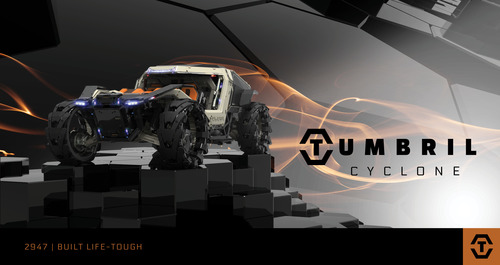 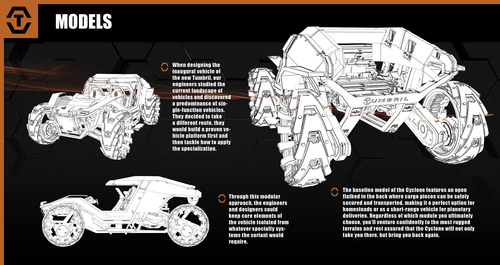 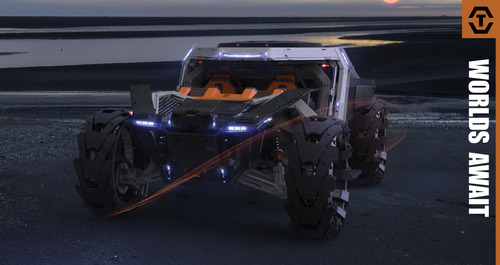 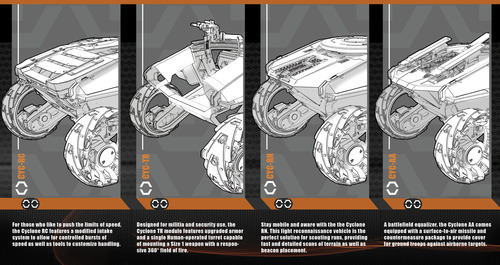 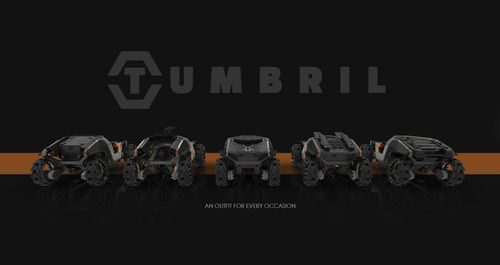 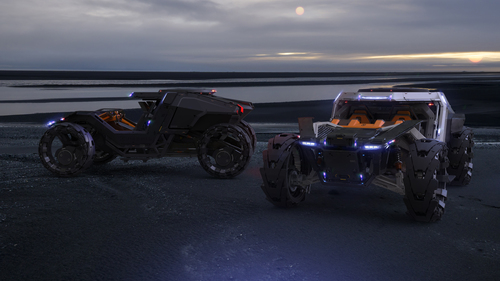 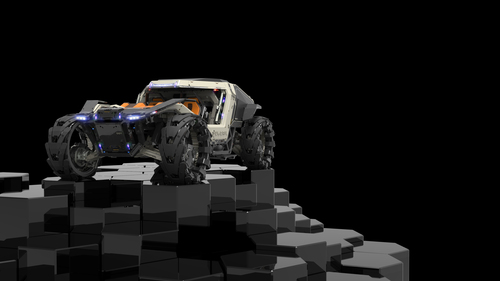 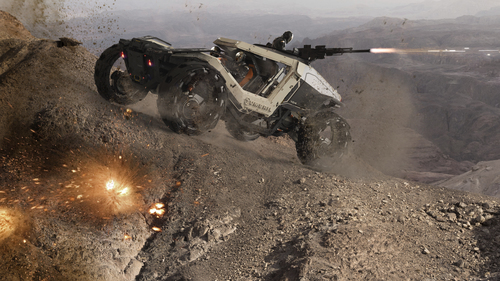 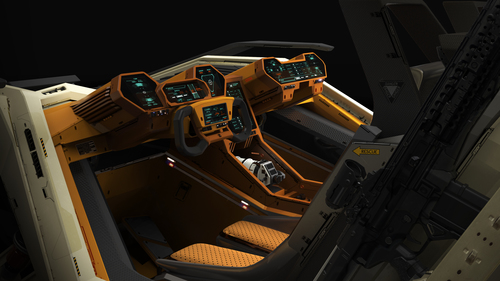 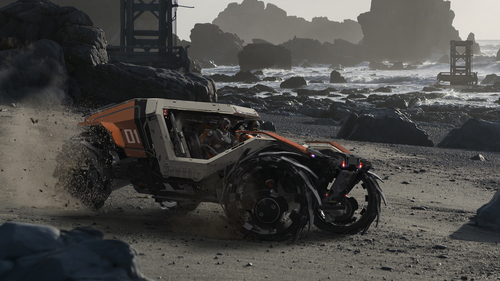 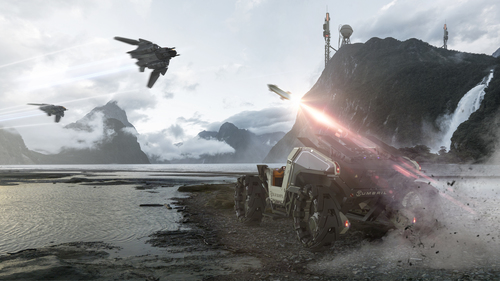 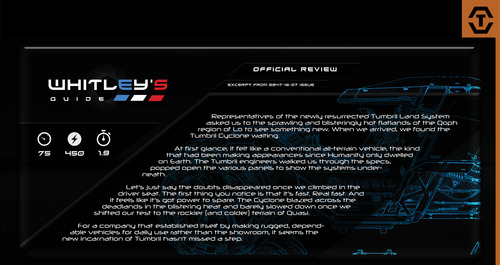 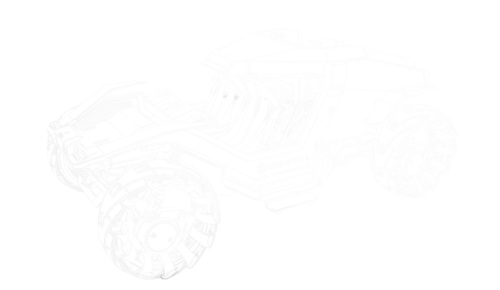 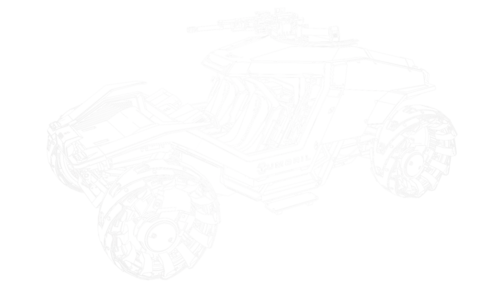 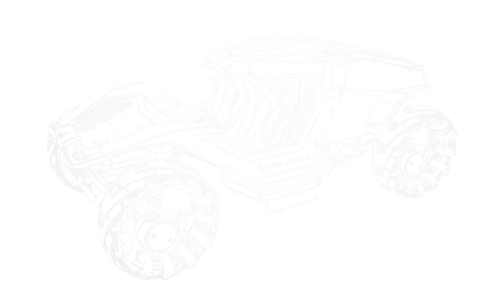 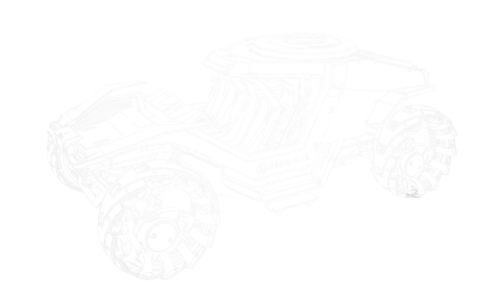 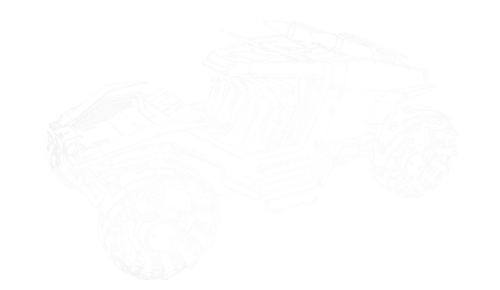 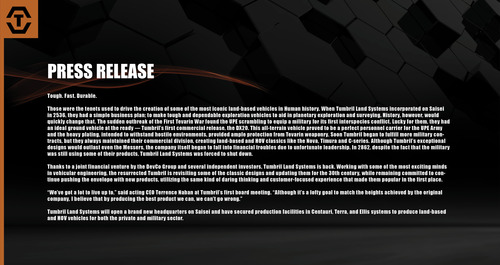 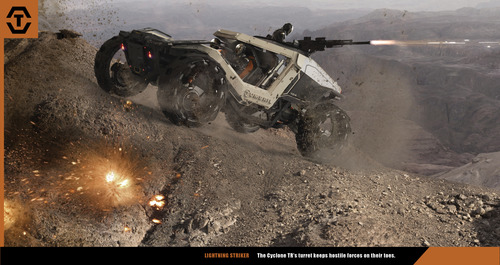 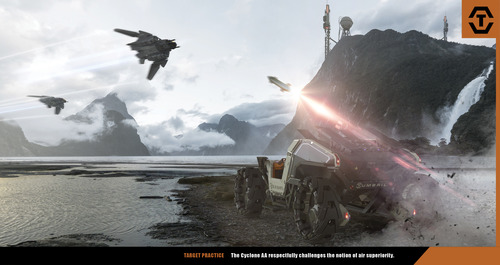 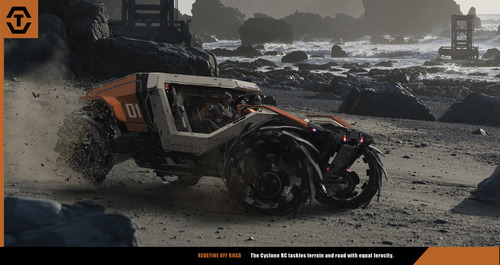 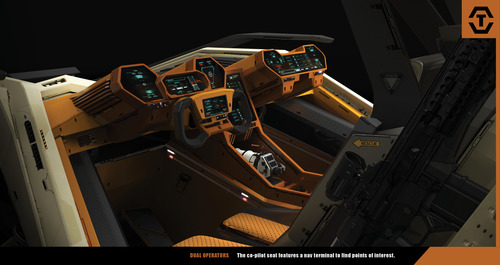 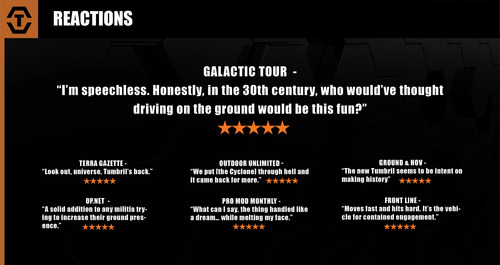 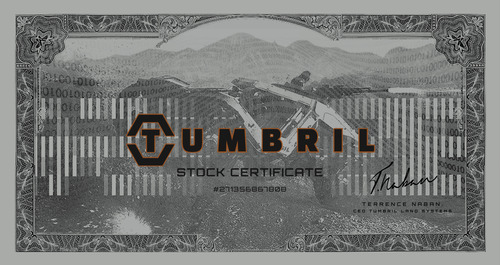 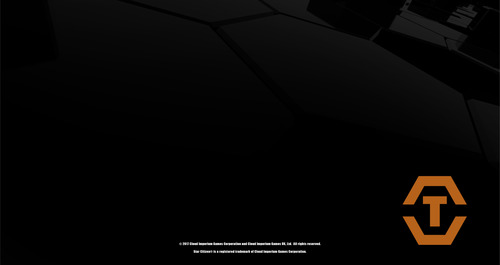 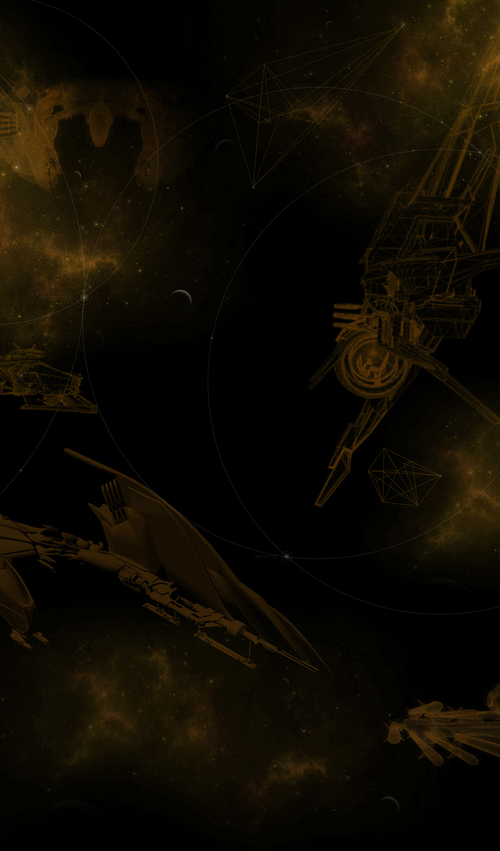