Writer’s Note: Portfolio: Rest & Relax was published originally as a Subscriber Exclusive on August 15, 2018.
“I’m seriously beginning to wonder whether space has more stars or R&R stations.” – Esen Landari
It’s incredible to consider that in under fifty years, Rest & Relax has gone from a single station in Baker to the star-spanning empire it is today. Almost everywhere ships can fly, R&R, as it’s commonly called, can be found providing pilots the chance to refuel and resupply or just rest and relax. Thanks to its wide range of amenities and dependable service, R&R is as ubiquitous to travel as the quantum drive and a mainstay of modern life.

While studying to get her degree, famed economist Sally Hemsall wrote a paper supposing the direct correlation between a system’s economic health and the amount of coffee consumed at Rest & Relax stations. Noted Humanist, Gore Nikori, once said that visiting an R&R is as close to a universal experience as can be found among people today. Suffice to say, when engineer Johann Alejandre and hauler Kelley ‘Teak’ Sabatino were building the first Rest & Relax, they had little idea the impact their company would eventually have in the UEE.

Mythical Beginnings
The story of Rest & Relax begins with ambitious engineer Johann Alejandre proposing a daring deal to an investor — he would convert a decommissioned station into an active refueling depot in half the time and cost it would take to build a new one, but to the same quality. If Alejandre’s work didn’t match his words, then the upgrades done to the station would be free. His gambit worked. The investor purchased a decrepit scientific station in Baker, and Alejandre’s team soon began putting his innovative construction techniques into practice, turning the station into a sprawling rest stop for haulers.

A few weeks into the project, Alejandre met a brazen Baker-based hauler named Kelley ‘Teak’ Sabatino. He quickly noted that her shipping concern never made a late delivery, but Sabatino truly distinguished herself when another company lost a critical shipment within the system that put his timeline and budget in serious jeopardy. Upon hearing the news, she dispatched a Terrapin, located the lost ship, and even sent repair services to expedite its arrival at the station. Alejandre was amazed by her dedication. By the time construction concluded, Sabatino had been contracted to handle most shipments to the station.

Alejandre’s team completed the first Rest & Relax station faster and cheaper than even he predicted. This allowed him to exercise a clause in the contract and take an ownership stake in the company in lieu of payment for his services. Once an official owner, his first executive decision was to buy out Sabatino’s shipping concern and integrate it into their infrastructure. Sabatino only accepted the offer after being offered an ownership stake in the company, thus cementing one of the most significant business relationships of the last century.

While Alejandre and Sabatino have become industry icons, their business partner who provided the capital for the project has remained relatively unknown. Recently however, it has come to light that R&R’s success may owe more to this investor than previously believed.

The Secret Partner
Simply, Rest & Relax would not exist if not for Mahir Eriksen, the initially unnamed investor who purchased the outdated scientific station that became the first R&R. Eriksen already had a long and distinguished career investing in start-ups when Alejandre approached him with that daring offer. Eriksen’s lawyers drew up the initial contract, which included two clauses that proved to be prescient. One was the option that allowed Alejandre to take an ownership stake in the company, and the other stipulated that Eriksen’s involvement would remain a secret.

Chung Kristoff’s The Secret History of Rest & Relax first revealed Eriksen’s involvement in the company after years of extensive research and interviews. In the book, Kristoff claims Eriksen wanted to get involved in the day-to-day operations of a business but avoid the intense public criticism that often came with it. For years, he wearily watched others mismanage his investments and believed he could do better. But his incredible business acumen could only be matched by his desire to stay out of the public eye. Even as one of the Empire’s most successful investors, Eriksen’s name was virtually unknown outside of certain, well-connected circles.

With his anonymity guaranteed, Eriksen was the driving force behind many of the company’s first decisions. He handpicked the old scientific station as the one to be refurbished. He thought that its location would be ideal thanks to haulers constantly streaming through Baker to Xenia, a massive Covalex shipping hub, and the close proximity of two large jump points into Xi’an space. Eriksen even gets credit for recommending that Alejandre hire Sabatino to supply his construction operation, knowing that a well-built station was worthless unless properly supplied. He also went ahead and, unbeknownst to Alejandre, purchased a second station while the first one was still under construction. He had seen the progress they had been making and wanted to ensure that the talented crew had a second project to roll directly on to.

It is said that without Erikson, Alejandre and Sabatino would have been able to build a good rest stop, but with Erikson’s guidance, they were able to build an empire.

Accelerated Expansion
Baker’s first Rest & Relax station found immediate success and quickly became a one-stop shop for haulers. The facility was modern, well-designed and featured a wide variety of food options, amenities, and supply stores. Few people would have guessed that an old depressurized wreck was its foundation. Two more stations in Baker opened in quick succession, with Eriksen wanting to expand into nearby systems. This prompted Sabatino to suggest stations in every system within the ‘Terra Loop’, a term used by haulers to describe a series of large jump points connecting Baker, Kiel, Hadrian, Terra, Tayac, Goss, and Osiris.

Eriksen loved the ambition but ran into a major issue. There weren’t enough old stations to go around. Eriksen asked Alejandre to engineer a solution, and the result was the standard Rest & Relax station now seen across the universe. Taking the advanced techniques he had developed refurbishing stations, the design divided the station into standard pieces that were all easily shipped and assembled. They could also be put together in numerous ways to provide variety to the interior layouts. One of the old stations Eriksen had purchased was converted into a fabrication center and was soon set to producing station pieces. The mass production of these pieces fueled Rest & Relax’s rapid expansion through the Terra Loop and eventually across the Empire. As the company’s footprint expanded, they added additional production facilities to keep up with demand and reduce delivery times.

The expanding Rest & Relax empire forced Sabatino to constantly refine the logistics of keeping all the stations supplied. Their massive size meant there was a lot of store space to fill and maintain. Initially, Eriksen wanted to vertically integrate the stations with stores stocked with official R&R products and themed restaurants. Sabatino quickly nixed the idea and showed that the logistics of it would outweigh the benefits. She correctly argued that R&R’s stellar reputation among haulers meant businesses would want to rent spaces in their stations. This not only placed the onus of keeping store shelves stocked on someone else, but it also allowed each R&R station to develop its own character and better reflect the system it served. Today, each station can feature any combination of a dozen franchises specializing in everything from stylish body mods to fresh-fried fish rings, and many travelers will happily argue with you about which system is home to the best R&R.

“Haulers like going to an R&R because it’s not the same thing every time,” Sabatino told the Terra Gazette. “I know this because I’ve been a hauler all my life. There’s a certain calming monotony that comes with cruising through the stars. That’s why our stations are always a little different. If all our stations were the same, I’m sure haulers would walk through them with that same glazed look in their eyes. We want to break them out of that mindset so they can take a few minutes for themselves to rest and relax.”

Triumphant Triumvirate
When the first Rest & Relax opened in Baker, no one, not even its founders, could’ve predicted its reach would soon stretch across the empire. The unlikely trio of an inventive engineer, industrious hauler, and reclusive entrepreneur created a perfect storm that combined technological innovation, impeccable timing, and the means and motivation to make it all happen.

Even with these advantages, the company couldn’t have succeeded without haulers and everyday travelers flocking to their stations. Industry analysts kept betting against the company, convinced there was no place for it in the saturated marketplace. Yet, Rest & Relax proved that putting a new spin on an old idea can elevate it to previously unknown levels. 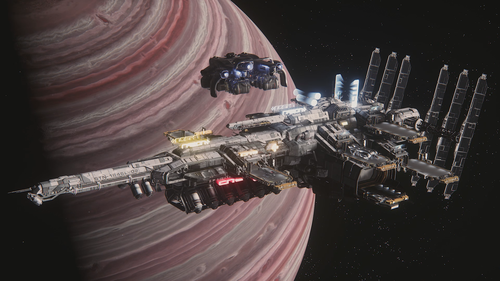