We announced the star system stretch goals only a few hours ago and it’s already time to show you the first one! Congratulations on $3.1 million, pilots! Here’s what you’ve added to the map:

Odin II is within the system’s minuscule green band and is home to a variety of temporary UEE “deep freeze” expeditions, with the lack of surviving vegetation making it an ideal site for a weapons laboratory. Smugglers occasionally choose to call the system home, but their stays are infrequent… Odin is too cold even for pirates and trained killers.

Odin II’s moon, Vili, is frequently used as a corporate weapons testing range. As a result, something of a black market for weapons technology has grown up in the region: much of it is junk, but pilots have reported finding occasional deals on discarded top-of-the-line military-grade surplus.

There is a thick asteroid belt close in, likely the remnants of a planet which did not survive the star’s failure. The UEE formally bans mining in the system, although little effort is paid to enforcing this edict. The field is largely uninteresting, but intrepid miners have been known to hit on substantive caches of gemstones, making their trips worthwhile.

Odin IV is a gas giant and home to a UEE-sponsored hydrogen rendering station and fuel depot. Fuel is remarkably cheap here for this part of the galaxy, although accommodations are notoriously spartan.

Next up, at $3.2 million: “Seven planets exist in this system. Unfortunately, the star is about to go supernova so no one has claimed it. A great place to have clandestine meetings.” 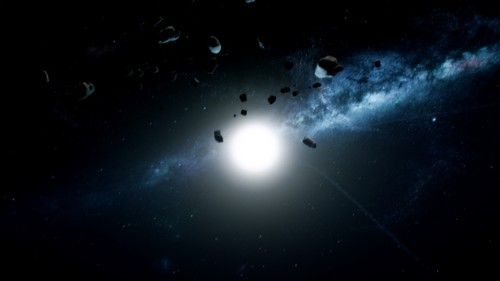