Better late than never: the new forums are online and you can access them here or through the forums tab at the top of the page! The one issue is that you’re going to have to re-add your signatures and avatars… but we finally have the robust, customizable forum system you demanded which allows for proper moderation and community management! We’ve created a simple “prime directive” for forum users that tells you how you should behave, how we’ll punish you when you don’t and what we’re going to do for you in return. We think it’s a fair system that should create a good, positive community. As with all aspects, we’d love your comments. We do believe that most of this is common sense and will become unnecessary as the forums become available only to pledgers and backers(after all, no one wants to pay for a game just to troll a message board) but that it is always good to know where you stand. We reserve the right to amend these rules in the future as the community evolves.

Forum Rules
Be good, damn it. Treat other people the way you want to be treated. Every account is another human being who is excited about Star Citizen. Disagree calmly and intelligently, do not attack each other when you don’t share the same ideas. Keep it clean. We’re all adults here… and that means being responsible, not plastering risqué content all over your message boards. No pornography, nothing racist, nothing else outright offensive to other people. You’re helping to build a game, not a high school locker room. No trolling. Do not post messages specifically intended to get a rise out of others. We know there’s an impulse to do it, but it doesn’t contribute to the community, it tears it down. Your resonsibility as early pledgers is to help form a great community, not to endlessly frustrate those who come later. Stay on topic. Every message board has a topic and you should stick to it. Don’t advertise your guild in the game suggestions board. No spam. Talking about your personal projects and successes is welcome and encouraged in the off-topic areas, selling things is NOT. Contribute. We want to hear from you. Some of the best ideas come from the unlikeliest thoughts, so if you have something to add stand up and say it!
Punishment

For our part, we will endeavor to be as responsive as possible. We’re all one community and everyone here is as excited about Star Citizen as you are. Cloud Imperium staff will do their best to stay active at the forums wherever possible and we will establish a fair system of moderators to keep the boards clean and active.

We recognize that you are the vanguard: you’re the fans who put up your money early because you believed in the game and we’re going to do the best we can to respect that. Know that in addition to fans with great ideas we want to hear, we also view you as ambassadors responsible for helping spread the word about this game and we respect you for that.

If you believe there is something wrong, do not hesitate to contact us and we will reply as quickly as possible. We want this community to grow and thrive and create and we’re relying on it to help us create the best game possible. Follow these rules and we’ll be able to spend more time involving you in the process!

Montreal Update – Behaviour Interactive Partnership
I mentioned in an earlier Comm-Link that we are planning on having the core development of Star Citizen happen in three locations – Los Angeles, Californa, Austin, Texas and Montreal, Canada. There are quite a few reasons why Montreal is interesting – there is a lot of game development talent: Ubisoft, Warner Bros, EA and THQ all have large development studios and games such as the Assassin’s Creed series, Far Cry 2 & 3 and Deus Ex Revolutions have all come out of Montreal. There are a fair amount of developers with CryEngine experience (the Far Cry series is built on a modified version of the original CryEngine and THQ has been working on a couple of unannounced CryEngine projects.) Finally, all your dollars go much further in Montreal than they do in Austin and Los Angeles due to the strong government support for game development and the lower cost of living. This allows us to pack more ships, locations and features in than we could if we just built the game in Los Angeles and Austin.

As part of the year of preparation, research and development I did in building the prototype I was testing out workflow concepts and personnel. Montreal was an area that I knew from making films (which the Canadian and Quebec governments also support strongly), so it was an area I considered right from the start. I weighed several options, from building a studio from scratch to partnering with an established studio to help build out a team. Considering everything else that we need to accomplish with Star Citizen I decided that it was smarter to partner with someone that all ready has an infrastructure and is up and running, much the same way I would contract with a local production service company if I was making a film.

Behaviour Interactive are the biggest independent developer in Montreal, with a great infrastructure and work process. They have worked on over 130 games with some of the biggest publishers in the industry, have a reputation for being on time and budget and have many people that worked on big AAA titles like Assassins Creed or Far Cry 3 (Ubisoft contracted them to help out the recently shipped Far Cry 3.)

Over the last year they contributed some resources on spec to flesh out some of the technical design on the server back end (Behaviour designed, built and maintains Nickelodeon’s kid’s MMO, Monkey Quest, which has over 10 million users) and help build the prototype as a test to see if we could work well together and they could meet the quality standards I want to hit for Star Citizen. If you liked the prototype you’ve already seen some of their work and approved. Because of this I’m happy to announce formally that Behaviour Interactive will be our partner in Montreal, Canada. You can read the complete press release here.

The team in Montreal will be fully integrated with the Star Citizen teams in Los Angeles and Austin, and will be managed and directed by myself and other Star Citizen team leaders. The Montreal team will be made up of a combination of Behaviour employees that will transfer into this new group and new people we hire from the Montreal game scene (so if that are any developers in Montreal that would like to join Star Citizen, please send your resumes to Behaviour!)

This allows us to flesh out the full Star Citizen team sooner and waste less time on building out studio infrastructure so I feel it is a win for everyone. I would like everyone to welcome the Behaviour folks to the team. Over the next year you’ll get to meet them and see what they’re working on in the same manner as the Los Angeles and Austin teams. One of the core tenants of the team DNA that I’m trying to build is a commitment to interaction with the community and we are setting up the ability to film in all three locations. In fact one of our key interview questions is if a potential hire is comfortable interacting with the community occasionally and being on camera!

MMORPG.com Nomination
Some other cool news: Star Citizen has been nominated for most anticipated game in MMORPG.com’s annual Player’s Choice awards! We’d be very happy if you’d take a moment to vote for us. Let’s win our first award!

Welcome, Kickstarter backers! The process of integrating Kickstarter accounts has begun and many existing users may begin to notice their Kickstarter pledges appearing in Your Account page. Please note that the additional money you pledged for Kickstarter add-ons will appear as credits for now; in the near future you will be able to apply this money to add-ons through the site at the original prices. Those who purchased limited time upgrades such as the Idris Corvette will have the option to choose those! If you have a question regarding the integration of your Kickstarter pledge please be patient as due the the large volume of transactions it will take several days to investigate all the issues – trust us we will take care of you! 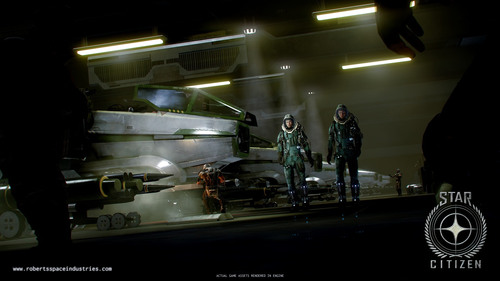