This portfolio originally appeared in Jump Point 8.10.
“TAKE THE NEXT STEP”
This slogan is the first thing many associate with Caldera, an armor manufacturer that strives to master environmental extremes. Initially considered a niche market, Caldera has exceeded even CEO Layth Brentano’s wildest expectations thanks to the now-famous slogan and ad that popularized the brand. The most iconic, featuring an explorer trekking through the snow with a raised arm braced against the bitter wind, could be found on a near-perpetual loop in spaceports around the UEE. In it, the protagonist’s Novikov armor accumulates frost and snow as they summit the rim of a massive caldera moments before sunset. The drone camera, buffeted by high winds, follows shakily and with each step reveals an incredible panoramic view of the crater. The now iconic slogan then fading into the top half of the ad.

“I’ve always loved that ad. It embodies what I want people to feel when wearing Caldera; awe on a personal scale,” said Brentano. “Plus, that ad features the actual prototype suit and the person wearing it is the reason we’re around.”

CONFIDENCE INTERVAL
Layth Brentano often described himself as a “capable engineer, but a better go-getter.” Born in a bitterly cold region of Vann, Croshaw, Brentano spent much of his youth outside helping maintain his family’s mining outpost. In the harsh weather, the machines frequently needed repairs and Brentano dedicated long hours, bundled up against the cold, helping his uncle patch broken parts as best he could. All the while, he developed a passion for mechanics that would last his entire life.

A scholarship brought Brentano to Reisse to attend the University of Rhetor. There, surrounded by fellow engineers, he soon realized that while he had very inventive ideas, executing them required a level of skill that only top students possessed. One engineer in particular would highlight this to Brentano.

Tetsuya Lang was infamous around campus for his genius. Lang began working on ways to mitigate thermal expansion on metals during his first year and never stopped. Lang was presenting an update on his ongoing work to his third-year class when a comment from Brentano would inspire a solution to a problem that had stymied progress for months. The two quickly became inseparable, with Lang recognizing that Brentano excelled at non-linear thinking and had an eye for application. Brentano noted that heat resistant armor often accounted for thermal expansion by incorporating other materials between the pieces. If they could limit those other materials, they could build a safer and sturdier suit. Once Lang’s initial experiments showed promise, Brentano handled the arduous application process that would grant the pair a prestigious UEE student research grant and their own lab on campus. By graduation, their experiments were given an R&D grant and a provisional lab on Persei, where most of the cutting-edge work in the Empire was done.

CHAIN REACTION
The initial review of Brentano and Lang’s work in Persei highlighted several critical benchmarks that the pair missed. When they were reassigned to a small lab near the loud landing pads, Brentano knew their grant was on the line. Then, one day in the hall, Brentano struck up a conversation with Akili Harris from a nearby Department of the Interior lab. The former Navy pilot flew research missions collecting core samples from planets, moons, and asteroids. The two bonded over tales of toiling in harsh weather conditions, and it was quickly apparent that she had spent more time in extreme environments than anyone Brentano had ever met. He practically dragged her back to their lab. After examining their work, Harris showed off a strange geometric scar on her left leg, seared there years ago when a hydrothermal vent unexpectedly erupted and melted part of her armor. If their tech had been available, maybe she wouldn’t have been injured.

Harris returned to Brentano and Lang’s lab the next day with her current armor kit and they began making upgrades. She became a frequent guest during Brentano and Lang’s frantic final months in Persei. With a new practical application for their research, they made fast progress. However, the timing was too late and the pair lost their grant. Fortunately, Harris had become invested in the project and offered to help facilitate their move to Mentor, even flying the most valuable equipment there herself. To thank her, Brentano offered to build Harris a suit to her specifications. She agreed and continued to share her insights into the design, insisting on several key features including ample storage and an ultra-comfortable inner lining. The prototype impressed Brentano so much he offered Harris a cut of every one sold.

Harris retired from the Department of the Interior and worked with Lang to perfect the cold and warm weather suit prototypes while Brentano tried to find a buyer. Government officials called the suit first-class but couldn’t justify the high per-unit cost with their budget. Potential investors worried it was a specialist suit that few would need, so Brentano set out to prove why someone would want it. He asked Harris to take him to the most beautiful place she’d been. Footage from that adventure to the snowy caldera convinced several early investors to come onboard, and also inspired the company’s name.

Brentano stressed over the suit’s first run as it sat on store shelves for almost a year before becoming the hottest buy of 2942. This sudden success hinged on solid reviews, strong word of mouth on the few suits sold, and a little luck. In late 2941, a government report revealed that the recently discovered Kabal system contained a planet with ancient Tevarin settlements. Missed by the initial scans but discovered by a survey team on foot, pictures of extraordinary Tevarin buildings covered in native plant life flooded the spectrum. Brentano saw an immediate increase in sales and capitalized. He recut footage from his trip with Harris into the famous ad and put it on as many landing zone vid screens as possible. With sales spiking and increased consumer interest in explorer suits, Caldera secured funding for a significant production run and never looked back.

Ever since, Caldera has scaled operations swiftly but smartly, with an eye on maintaining quality standards. While it has strategically expanded its product line, its flagship product remains the Novikov and Pembroke environmental suits, which attracts a wide and loyal fan-base spanning professional explorers to weekend adventurers. Tetsuya Lang drives new product development and continues to tinker with older designs he believes could be improved. Akili Harris still consults for Caldera when not out on an adventure of her own. Meanwhile, Brentano keeps his eye on the big picture as CEO and keeps the company focused on maintaining its image as a manufacturer of dependable and durable high-tech environmental armor. He personally field-tests every new product and provides vital engineering and user feedback. He even explored the far reaches of his homeworld of Vann while wearing the Novikov suit. When asked about the experience for a local paper, Brentano replied that he was “glad I didn’t have one of these when I was a kid. I would’ve spent all my time running around in the snow instead of falling in love with engineering.” 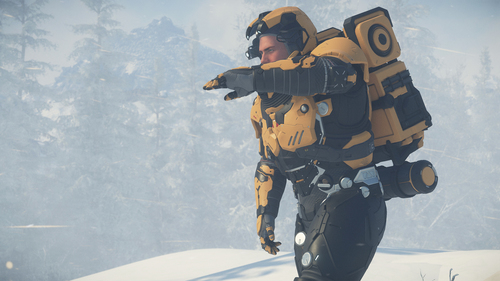