This article originally appeared in Jump Point 8.9.
It’s dusk when the small group I’m hiking with enters a clearing. Our tour leader, who asked to be identified only as Ronove, stops and announces we’ve arrived. I set down my backpack, exhausted yet exhilarated, and soak in the view. I’ve promised to keep the coordinates and route secret, but I can say we’re deep within Vastac’s Tecuya Mountains with an incredible view of the sun setting over a riparian canyon. A sense of peace and tranquility washes over me before being replaced by the thought that my blood-curdling screams could echo through the canyon and no one would ever hear. Makes sense why Neville Lott chose this spot for his grisly deeds.

Ronove announces that the ceremony will begin once the sun is set. Others in the group prepare by changing out of sensible hiking gear and into elaborate costumes that are common at Day of the Vara celebrations but slightly unsettlingly in this setting. A few people briefly disappear into the dusk only to return with intensely focused, bloodshot eyes. I sheepishly pull out an old Neville Lott mask and slip it over my head. It’s basically a crudely stitched gunny sack with an integrated respirator. Lott wore such a sack to hide his horrific scars but kept the respirator hidden underneath. (The respirator being integrated in the mask was actually popularized by pop culture representations of Lott rather than the real thing.)

I avoid disdainful stares from more committed participants for going with an easy and obvious choice for the ceremony. Instead, I watch Ronove strategically place candles around the clearing. That’s when I first sense that something’s wrong. I count Ronove’s steps while crossing from one side of the clearing to the other and my heart drops. It’s smaller than the crime scene described in police reports. There’s no way Neville Lott committed his horrific murders here.

I’m certain of this because I’ve read every book I could find on Neville Lott and poured over the police reports multiple times. My obsession with Terra’s most famous murderer began as a young child huddled around a campfire in these very mountains, as my father and uncle recalled the summer their family camping trip was cancelled. They proceeded to tell me the story of how seven hikers went missing over the course of that year, only to be found having suffered unspeakable horrors at the hands of the deformed and deranged Neville Lott. They avoided grisly specifics but my young, imaginative mind couldn’t keep from wondering exactly what happened.

Then, one night when my parents went out, I secretly watched the 2902 slasher classic inspired by Lott’s killing spree, The Hill Horror. The explicit imagery of Lott dissecting and dismembering his victims remains burned into my mind, but what stuck with me most were the flashbacks to Lott’s normal life in Caliban before the Vanduul invasion. It wasn’t the graphic depiction of him burning off his own tongue that kept me up that night. It was the scene of Lott buried beneath the rubble of his home, unable to do anything but watch through a crack in the wreckage as Vanduul massacred his family. Somehow Neville Lott embodied true evil and still earned my pity. These conflicting emotions confused me at first. How could I pity someone who did such unspeakable actions? Can extreme trauma truly change someone that much? Where exactly did history end and the myth begin? These questions inspired me to learn as much as possible about the real Neville Lott.

My obsession with the Lott case blossomed into a general fascination with the macabre and gruesome true-crime tales. Between creative writing and journalism courses at university, I also took forensic science and criminal psychology classes, hoping to gain additional insight into why or how someone would commit such heinous acts. I’ve spent much of my professional career chasing stories dealing with the same issues that fascinated me as a kid. So, when I was approached about writing a Dispatches from the Dark series on the UEE’s most haunted locations, Neville Lott’s clearing immediately came to mind. Finally, I could justify why I wanted to find a spot law enforcement had kept a secret since its initial discovery.

Very little is publicly known about the scene of Lott’s crimes. The clearing is somewhere in the Tecuya Mountains in the Terran state of Vastac and under enough cover to not be spotted by surveying ships. It’s secluded enough so it could only be reached on foot, but still close enough to hiking trails and campgrounds so Lott could hunt for victims. Most of the people who processed the scene have now passed, but even in the wake of renewed interest in the case following the release of The Hill Horror, those that had been there swore never to disclose its location. When interviewed for Unspeakable Evil, what I consider the definitive book on Lott, lead investigator Gaston Nazari flatly rejected author Paula Qi’s request to take her to the scene. Nazari bluntly told her, “No good can come from going there. In all honesty, I hope a rockslide has destroyed the site forever.”

I’ll admit that being told I can’t do something often only motivates me more. I re-read all I could about the Lott case and combed through every detail in the police reports for any morsel that might hint at its location. I even compared hiking guides of the era to current ones to see if any trails had been rerouted or abandoned. When my research yielded no new insights, a friend put me in touch with someone in the Terran occult community who claimed to have participated in a secretive ceremony at the sight. Through this connection I met Ronove. We met for coffee in Prime and felt each other out. I guaranteed their anonymity and promised to keep the location and aspects of the ceremony secret. Ronove proved to be knowledgeable about both Lott and his crimes. Now, as I take a seat on a cold rock before the ceremony begins, I regret not asking more specific questions.

Still, I willingly participate in a ceremony best described as blending occult pageantry with true crime spectacle. Ronove lights candles, leads chants, and freely blends facts with fictional flourishes popularized by The Hill Horror. Honestly, it’s frightfully good fun, even if it’s not the dark adventure to Terra’s most notorious crime scene as I was promised.

Following the ceremony, we all change back into hiking gear and strap on headlamps for the trek out. We walk mostly in silence during the long journey down the mountain. I’m exhausted and a bit deflated. Others are still coming down from their pre-ceremony indulgences. Trees rustle above and around us. A sudden twig snap in the dark startles the woman in front of me enough to make her stop dead in her tracks. At one point, a stiff breeze howls through the canyon sounding like a distant, mournful scream. The hair on the back of my neck stands up, and a wave of sadness washes over me.

For the rest of the hike, I’m haunted by that moment of fear. Although brief and ultimately harmless, it made me think of Neville Lott’s victims in the last moments of their lives. Poor souls who ventured into these mountains to find peace and solitude only to suffer terrible fates. Before coming here, I was convinced that visiting Neville Lott’s clearing might provide additional insight into a killer that has fascinated me for decades. Yet as I leave, I feel guilty and think about how disrespectful it is to the victims to turn that clearing into a tourist destination for someone fascinated by their killer.

By the time I’m out of the forest, I have no desire to continue my search for the elusive spot. This trip has convinced me that some places deserve to be lost to time. And though I may not have reached Neville Lott’s clearing, I still remain haunted by it. 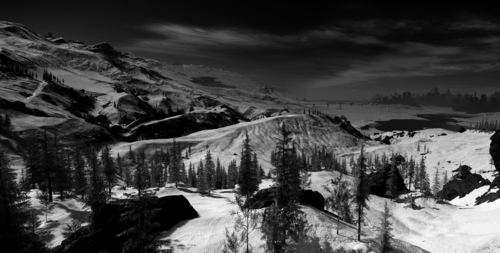