Notable Changes for October 20th, 2021
Progress Tracker
Similar to the previous announcement of Richard Tyrer shifting focus to Squadron 42 – we will be updating our team structures to grant Squadron 42 a dedicated Character Art team. Therefore with this publish, you’ll notice the addition of three new teams: SQ42 Character Art, SC Character Art, and Character Tech Art. These teams were all under the Character Art & Tech umbrella, and resources on those teams were used across both Star Citizen and Squadron 42. With this change, these teams are now dedicated resources for their respective projects, rather than splitting their time between the two, which has already resulted in measurable benefits to all three teams across the board.

The deliverables for these teams haven’t changed, so you’ll find them to be the same as the last publish for Q4. The original Character Art & Tech team will remain on the roadmap through Q3 as legacy data.

The following deliverable has been added to the Progress Tracker:

The following deliverables, previously marked as Unannounced, are now visible on the Progress Tracker:

Origin 400i
Building, balancing, and implementing Origin’s luxury explorer, the 400i, into the game.

Rastar
Developing and implementing Rastar, a tool that allows the placement of modular structures on planet surfaces, including the deformation of the surrounding terrain to accommodate it. This will eventually be used by players to place their own structures, such as with the Consolidated Outland Pioneer.

Aopoa San’tok.yāi
The timing of the development of this ship is currently under re-evaluation. Therefore it is being removed from the Progress Tracker until this is complete.

Release View
The following card has been added to Release View for 3.15, and has also been marked as Committed:

Origin 400i
Building, balancing, and implementing Origin’s luxury explorer, the 400i, into the game.

Shops and Patrons
After its review and extensive testing, the team has made the decision to grant this feature additional time for polish. For this reason, this card is being relocated to the 3.16 column in Q4. 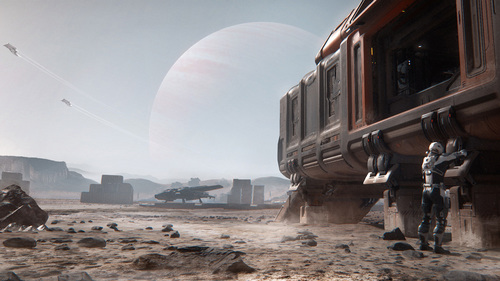