Need something to play before Star Citizen ships? You’re in luck: Good Old Games has today made a piece of Cloud Imperium history available once again! Conquest: Frontier Wars, developed at Chris Roberts’ Digital Anvil studio and helmed by our own Eric “Wingman” Peterson is now available as a digital download for just $5.99. You can pick up your copy here.

In honor of this release, we asked Wingman a few questions about making the game:

By far the team, we had an amazing team working on the game, Chris Roberts, Sergio Rosas, Tom Mauer, Arvee Gardee, Jamie Wiggs, Jason Yenawine, Sean Barton, Martin Galway – just amazing people and most of them still in the industry. I loved working every single minute with them. I had just shipped Starlancer and was asked to come on board and produce/design Conquest, and we put that team through the paces, and got that game singing, so much depth of game play and you can still play it today, even as a single player skirmish experience it is amazing fun.

Conquest began life at Digital Anvil, but was finished at Fever Pitch. What happened?

When Microsoft was in negotiations to purchase Digital Anvil, they had decided that they were going to put their emphasis on the RTS side of things towards Age of Empires, and thus were not interested in another high quality RTS. So, we negotiated the rights to transfer to the founders of Digital Anvil (Chris, myself, Erin, etc..etc) and then I started Fever Pitch Studios with Tom Mauer to finish the game.

When Microsoft was our publisher they were pushing us to cut tons of features because it would have added to the testing time of the project. The team disagreed and Tom and I added all of them back into the game, which in our opinion added so much more depth to the project. Things like Fleet Admirals, and varied debris types, all crucial to a large game where you could have your attentions focused elsewhere and needed those features to help you play the game as designed.

What sets Conquest apart from other RTS games?

Where to start? First, you had the ability to fight on up to 16 maps at one time, and you could group your fleets of ships in ways in which it suited your play style, hit and run, slug it out, fight from a distance, we had it all covered, and each individual could play the game their own way. Then we were one of, if not the, first to have supplies and supply lines which meant you had much more strategy involved in how you played the game. We used to say we put the strategy in RTS.

Have you stayed in touch with the Conquest community? Are they still active today?

I have indeed, they are still active in modding the game some 10ish years later. It is their dedication that has kept Conquest alive all these years. In fact we are looking at releasing the source code from the original to allow them to continue modifying and making versions of a game we all love so dearly.

You still own the rights to Conquest. Could we see the source code someday? Or a sequel?

Source – yes, as mentioned above, we want to release it, just got to get all the legalese sorted out on our end. As for the sequel, we actually have it about 60% done, we have added a 4th race, put in special weapons to destroy planets, and of course if you allow that to terraform them as well. We have created hybrid units where if you have technology from multiple races it will unlock unique units. But, alas, the team is scattered, and I am busy making Star Citizen be the best Space Sim ever. So it is on hold, unless maybe the community decides it wants to take up that challenge, and then maybe just maybe, we can find a way to make that work….what do you say everyone…you up for it? 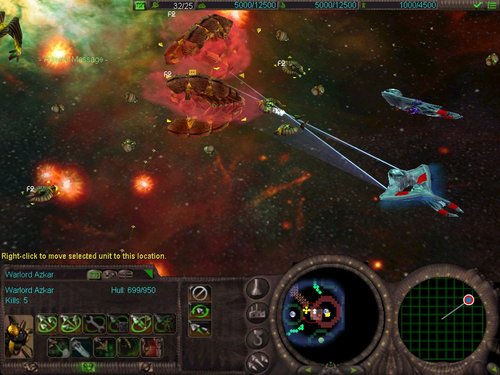