This portfolio originally appeared in Jump Point 7.7.
Prior to the Second Tevarin War, spaceflight was a very different endeavor than today. Many civilian ships confidently explored the unknown without weapons, instead preferring to haul extra water, food, oxygen, and components. Adding armaments to private ships was legal but required a rigorous permitting process. Ship weapons were considered a niche industry geared mainly toward the military and security forces and some civilian spacecraft didn’t even come with weapon mounts.

However, during the seven-year conflict, Tevarin warlord Corath’Thal strategically scattered heavily armed and shielded ships to create a much more nimble and agile fleet. These units were capable of attacking Humanity on every front and disappearing before authorities could organize armed resistance. With the military and local militias stretched thin, civilians needed to arm their ships for personal protection. Unfortunately, the era’s standard civilian weapons were no match for the Tevarin’s powerful phalanx shields. Bigger and more powerful weapons were required, and Taisei ‘Talon’ Jessop had a plan and the means to better arm the public for their own protection.

Means of Protection
Born in 2535, Taisei Jessop’s family had deep roots in the Croshaw system. Over the previous century, the Jessop’s had accrued a vast fortune through shipping, mining, and construction. From landing zone hangars to rest stops and refueling stations, it would be almost impossible to visit Croshaw during the 25th century and not do business with at least one company that the family had a stake in. Yet, as Taisei Jessop came of age, a combination of bad business investments and extravagant spending meant most of the family fortune had been squandered. Croshaw’s elite even joked that the most valuable thing the family still possessed was their well-respected name.

Jessop grew determined to reverse his family’s fate. He ascended to the CEO position of the company in 2579 after orchestrating a boardroom coup that unseated his cousin Polima. His promise to reverse the family’s fortune initially stumbled as his controlling managerial style stifled innovation and convinced startups to avoid their investment capital. Even so, he quickly garnered a reputation for being intense and intelligent. This earned Jessop the nickname “Talon” for the way he tenaciously tackled a task. As a former business partner said, “once Talon hooked himself into something, he never let go.”

Jessop’s leadership proved to be a moderate success – enough to keep him in power, but not to return the family to its previous glory. Then, in 2603, the Second Tevarin War erupted. The Empire’s normal commerce ground to a halt, forcing Jessop to look for investments outside of Croshaw. During one such trip, his convoy came under attack by Tevarin forces. Jessop barely survived after his ship’s ballistic cannons overheated. It was only a well-placed missile fired by his security team that saved the day. Upon returning home, Jessop ensured that his family, friends, and confidants had proper armaments on their ships. The cost and complication of doing so opened his eyes to an opportunity.

As most companies clamored for government contracts related to the war effort, Jessop focused on providing the public a means of protection. After exclaiming that “guns are too damn complicated,” he decided to produce missiles and torpedoes. As a nod to his nickname, Jessop called the company Talon. And like his reputation, once it sunk its hooks into the ship munitions market, it never let go.

Exploiting the Aftermath
Arming civilians with devastating ordnance proved to be popular during the Second Tevarin War. Jessop emptied the family coffers and exploited his deep business connections to secure the proper funding, facilities, and most importantly during a time of strict rationing, a steady stream of supplies. Though countless others started similar businesses at the time, Jessop had the wherewithal to make it a reality and a lasting success.

During one particularly successful marketing campaign, missile racks were given away and installed for free if purchased with enough munitions to fill them. Talon distributors flouted the onerous UEE permitting process and even told customers to contact the company if a government representative bothered them about the installation. Members of the board feared that this tactic could lead to an altercation with the UEE government. It turned out that was exactly what Jessop wanted.

The UEE wouldn’t turn their attention to Talon until they had won the Second Tevarin War, because while a well-armed populace proved to be a helpful and popular idea during the war, it had considerably less appeal in its aftermath. When the government eventually opened an investigation into Talon, Jessop was able to unleash a phalanx of lawyers to protect the business in conjunction with a well-prepared public relations team that leaned hard on the perception that Talon had saved countless civilian lives during the war. This sparked a vigorous debate about the role of the UEE in personal security with Talon’s name at the center. For years, Jessop bragged that this free advertising was the best thing to ever happen to the brand. Of course, it didn’t hurt that Talon’s missiles and rockets also earned a reputation for being both powerful and reliable.

Eventually, the UEE loosened its regulations and allowed each system to set its own standards. A deregulation race ensued as systems realized that stricter laws scared away some commercial traffic and took plenty of personnel to enforce. It wasn’t long before ships armed with heavy ordnance were the standard, not the exception, across the Empire.

Today, there are few pilots not familiar with Talon’s line of missiles, torpedoes, ordnance racks, and grenades. The company’s reputation for making dependable military-grade munitions for the public remains intact. Yet, Jessop’s role in the creation of the company still divides many. Some historians consider Jessop a heroic freedom fighter, while others describe his legacy as that of a greedy war profiteer. Despite this divide, there’s one thing everyone can agree on – if it can fly, there’s a Talon that can blow it up. 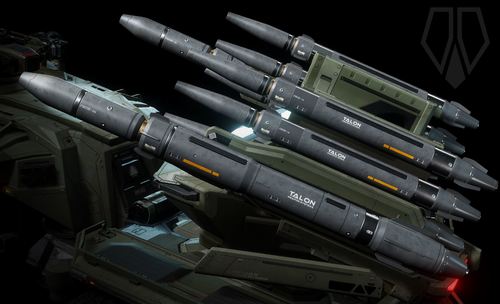