TRANSMISSION BEGINS:
Happy Luminalia one and all.

Welcome to a festive Far From Home. Ol’ Jegger here and hopefully coming in loud and clear. Let’s get things started by lighting the Luminalia lamp. And… there we go. Luminalia is officially underway, which means I will not stop this transmission until this lamp consumes all its oil. If you’re wondering how long will that be? Damned if I know. Your guess is as good as mine.

Got this thing ages ago from a shop parked up to the Yulin Flotilla. Glad I went in ‘cause I never saw that ship there again, and I used to do my fair share of runs to the Flotilla. Course the merchant didn’t know much about the lamp except that it doesn’t work with the newfangled oil pods measured out to exactly two days or, what is it again, 34,000 beats I think. Well, this lamp’s older, maybe even machined by hand. I can’t really tell and no Banu I ask seems to know. Anyways, I gotta fill this thing with actual oil, so the timing isn’t as predictable. The burner is sized to hold enough fuel for two days, but oil quality is also a factor. Trust me, I’ve bought some bum stuff that’s barely burned a day. Wasn’t even enough left over for a refill and let me tell you, the atmo scrubbers were none too happy about the smoke that stuff dumped out. That’s why I only ever buy the stuff in Banu space where there’s entire soulis dedicated to making it right. Over the years, I’ve actually grown to prefer not knowing exactly how long this thing will stay lit. There’s something nice about not having a set schedule and letting things happen at their own pace. Found that to be true for Luminalia and life.

Happy to have you joining me for the festivities, though no promises that I’ll be awake or sober for the entire thing. Speaking of… this year’s holiday cheer will be courtesy of Soles. Grabbed a bottle of their premium mezcal on a recent run to Cassel. Never had it before but a lotta you recommended it. Figured something with more bite would be better after last year’s debacle with that bottle of Atlas Nouveau. Hoping to pace myself a bit better this time around. Even sliced up a few fresh oza to suck on in between sips.

On that note, let me crack this Soles and raise a glass. Here’s to everyone out there spending this holiday like me… alone in the drift. And always remember, we are one souli. Cheers!

Oohhh, I like this. Nice kick, clean finish. And there’s that warmth rushing from my head to my toes. Hold on, gimme a second, I’m gonna place this bottle a little further away. Don’t want to make topping off my glass too easy. That’s what got me in trouble last year and inspired me to break out the guitar. Again, apologies to anyone who sat through that improvisational jam session. Wasn’t my finest hour, but hell, who’s ever had one of those after polishing off a bottle of vodka by themselves.

Thanks to everyone who sent in questions. Got a whole bunch of ‘em here that I’ll work through while we celebrate. Let’s start with one from Mara, who asks “how can you love Luminalia so much when you’re clearly a solitary creature?”

Paradox here is crystal clear, isn’t it? If y’all know anything about me, it’s that my favorite activity is drifting through the black alone aboard Shana. Not that I don’t like other folks. Guess I don’t mind being by my lonesome as much as others. Can’t explain why, I’m just made that way. Yet, I still want to, actually, need to connect with folks. Whether in person during a drop or with y’all by doing this here show. As much as I love my solitude, you can’t drift alone your entire life. Luminalia reminds me of that every year.

Back when folks just called me Jegger, I loved Luminalia for different reasons. I was running Eimi at the time, a beat-up old Aurora CL I put too much time and too many credits into. But, she was mine, so I made her faster and quieter than folks expected. And she got me outta trouble, well, most of the time.

When I had Eimi, I wasn’t good about researching routes or reading recent crime reports for whatever system I was heading through. Was particularly bad about it during Luminalia. Because, instead of celebrating, I’d pop a pep pack and see how many high-priced rush deliveries I could knock out before the ’verse returned to normal.

During one of these ‘holiday dashes’ as I used to call ‘em, I discovered I wasn’t the only one taking advantage of all the extra deliveries. Got ripped outta QT en route to some space station in Magnus. Knew right away I was in real trouble. Eimi’s radar was flooded with ships burning in our direction. She could run, and she could hide, but she couldn’t take on a fleet of folks with bad intentions all by her lonesome.

I immediately spooled the QD, but one of ‘em got close enough to dampen the signal. I should’ve called for help right then and there, or tried to negotiate handing off the cargo. But instead I panicked and asked Eimi to outrun ‘em. Not sure why I thought that was the right choice at the time, but that’s what I did. For every attack I slipped, another found its mark. Wasn’t long before Eimi’s shields were almost completely shredded. Knew I wouldn’t last much longer so I got desperate and did the dumbest thing possible: I spun Eimi around and went on the attack.

Figured I didn’t have to fight ‘em all. Just the bastard with the quantum dampener. I’d noticed one ship never pushed me but flew like crazy to stay close. Guessed it had to be the one keeping my QD on lockdown, so I targeted it and unleashed everything I had. Remember seeing its shield spark and flare, but have no idea what state I left it in. I just dove Eimi away and pushed as much power as possible to her engines.

Gave Eimi a beat to get some distance then brought up the QD. Was never more relieved to hear it spool. I locked on to the closest destination and hoped it could calibrate before being blown to bits. Honestly don’t know how Eimi made it but we exited QT with about every warning sensor possible screaming at me. Eimi limped to the landing pad of a nearby space station and groaned something fierce when I set her down. Even though it wasn’t where I needed to make my drop, neither of us were in a state to continue. So I climbed outta Eimi, went inside, and found the first bar.

Only when I walked in the door did I remember it was still Luminalia. Place was packed with drunk folks stumbling over themselves to welcome me personally and shove drinks in my hand. Almost turned around and walked right back out. Big groups really aren’t my thing and being stuck with one until the holiday ended wasn’t what I had in mind. But neither was climbing back into Eimi and facing whatever else might be lying in wait for me out there. Against every bone in my body, I stayed. Wasn’t long before I was righteously ripped and regaling all about how I ended up there. That’s when the owner of the place started a collection to pay for Eimi’s repairs. Told ‘em I was mighty thankful but couldn’t accept such an extravagant gift. I was the one who’d gotten myself into trouble and I’d be the one to get myself out. Never forgot the host’s response, “Not today. Today we’re all one souli and we look out for each other.” Guess to answer your question, Mara, I love Luminalia because it brings out the best in people and reminds us all that we’re connected. Something you should never forget, especially when you travel alone.

Oh, if anyone’s wondering, as my gift to the group for joining, I had to tell ‘em a joke. Damn, what was it again? Used to remember it. Maybe a bit more of this mezcal will shake it loose. But what I’ll never forget from that day was really learning that we are all one souli. Connected in ways we’ll never understand. Always affecting the world around us and anyone caught in our wake.

Look at me. Spinning some long, rambling tale and waxing poetic, and I’ve barely touched my drink so far. Let me just… huh. This bottle leaking or something?

Anyways, how ‘bout a little surprise? As your host, I’ve already gifted you a slightly embarrassing story. Now how about a song? Swear I’ve been practicing. Even taught myself a few Luminalia carols.

Let me just snag my guitar.

[ guitar going further out of tune ]

Just give me a moment he— 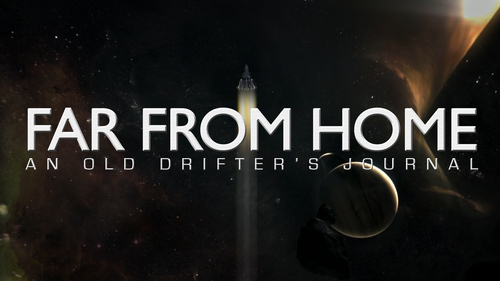 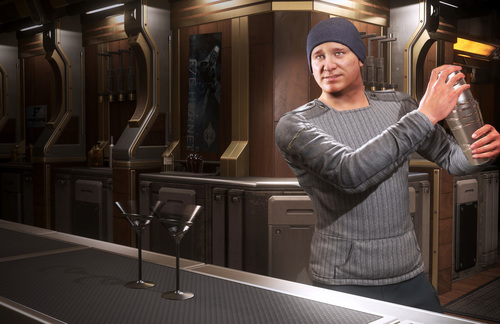