We live in an era where scientific understanding and innovations have taken us to the stars. Though we’ve learned so much about our universe, many stories of unexplained phenomena exist that not only confound the senses but make us question our reality. These are the universe’s Untold Tales.

Pyro is an unforgiving system where life is constantly under threat from intense solar flares. First visited in 2493 by a navjumper sent by mining company Pyrotechnic Amalgamated, the expense of overcoming the system’s unforgiving conditions bankrupt the business in 2563. Some analysts argued this outcome was predictable because of the company’s overly aggressive expansion plan, but others have come to believe failure was written in the stars and prophesied by a mysterious force known as the Prophet of Pyro.

In 2548, Pyrotechnic Amalgamated workers deep within a mine on Pyro II first reported hearing a strange voice. Site supervisors didn’t give the stories much weight until some workers refused to enter that mine, claiming the voice kept whispering “leave or be crushed.” One miner even wandered off in search of the voice and suffered a severe injury from a fall. Following this incident, the site supervisor ordered a complete sweep of the mine and a check of all mining suits and communication equipment. When nothing strange or unusual was found, miners were told to get back to work or be fired. For years, workers claimed to hear a mysterious voice at odd times but were placated by supervisors claiming it was only an auditory anomaly caused by the way air moved through the mines or their own overactive imaginations.

“These incidents are the first recorded encounters with the Prophet of Pyro,” claims Kiana Richards, an independent investigative journalist with an intriguing new theory about the Prophet. Richards has reviewed hundreds of comms and internal messages between Pyrotechnic Amalgamated employees in her search for precious details regarding the incidents. “Some believe these stories were fabricated years later by company executives to pass off the company’s failings, but there’s an extensive paper trail that proves something strange was definitely going on. Several miners even requested transfers out of fear that the voice was warning them of an impending collapse.” While the mine never actually collapsed, Pyrotechnic Amalgamated did. Crushed by the cost of building a station around Pyro VI when the system’s mines weren’t as productive as hoped, the company did not survive. Still, enough workers experienced the phenomena that after Pyrotechnic Amalgamated crumbled, people began to believe that the voice was actually a warning to the company. According to Richards, “That’s how the legend of the Prophet of Pyro really took off.”

No one knows the origin of the name Prophet of Pyro, but it was commonly used within the system by the 27th century. Several derelict ships of the era have been discovered with intact black boxes containing comms referencing it. By then the mysterious and prophetic voice had become part of the system’s folklore. People believed the stories enough to actively look for the alleged Prophet, but there was one small issue. No one knew exactly which of the abandoned mines contained it. “By the time the legend became widespread, most of the Pyrotechnic Amalgamated miners who experienced it firsthand had either left the system or died,” notes Richards. “Even the company comms I’ve examined don’t specify the exact mine, only the sector where it occurred, which contains almost a hundred different sites.”

During the early part of the 27th century, several people claimed to have received a revelation from the Prophet of Pyro, but their tales did little to increase the legend. That is until Tufo Fitzhugh claimed to have had an experience with the Prophet; it was a story that would go on to alter the system’s history. Tufo led a small crew of ultraviolent outlaws known as the Abyss who primarily targeted miners searching Pyro II for overlooked deposits. Following one such operation, Tufo claimed a mysterious force drew her deep into a mine where she repeatedly heard the words, “Ruler of ruin.” Convinced it was a revelation from the Prophet of Pyro, Tufo told the Abyss that it was their destiny to take over Ruin Station, an extremely ambitious goal considering the Ikkibu gang had kept the orbital platform under their iron grip for decades.

Still, Tufo leveraged her steadfast belief in the prophecy to convince others to join her cause. In 2678, through a few strategic alliances and an impeccable plan that drew a significant portion of the ruling Ikkibu gang away from Ruin Station, Tufo and the Abyss overtook the station in a surprise attack. They immediately locked down the station and successfully defended it from the remaining members of the Ikkibu gang for nearly three weeks. When the dust settled, the prophecy had come true. The Abyss were the new rulers of Ruin Station.

“The Abyss coming to control Ruin was a milestone moment for both Pyro and the legend of the
Prophet,” said Richards. “Previously, only the biggest gangs in the system fought for control of the station but the Abyss upended that convention. We now know that was because Tufo Fitzhugh was a gifted intelligence gatherer and strategist, who exploited the Ikkibu’s weaknesses, but the story spread contemporaneously was that this was all preordained by the Prophet of Pyro.”

The shocking and sudden rise of the Abyss inspired other outlaw factions to dream big and seek the Prophet of Pyro for a glimpse into their own destiny. Meanwhile, Tufo Fitzhugh and the Abyss proved to be better conquerors than rulers. Within a matter of years, Ruin Station was frequently under attack by other gangs hoping to unseat them. The constant fighting reduced Ruin Station to a wasteland. A fate that reportedly angered and confused Tufo, who returned to Pyro II in hopes of receiving another divination from the Prophet. It’s unknown if she received it, as her ship was attacked and destroyed during her return. The Abyss lost control of Ruin Station shortly thereafter to a coalition of smaller gangs, who would in turn spend the next year fighting among each other for control of the station. That now-infamous year deemed the “Fight of Five Gangs” cemented Ruin Station’s status within wider popular culture as an extremely dangerous destination and perennial powder keg. According to Richards, “Three of the gangs who fought for control of Ruin Station claimed to have received the blessing of the Prophet. Clearly, public belief was significant enough that these gangs thought the endorsement of the Prophet was essential to their claim to power.” Richards notes there’s no evidence any of these gangs even searched the mines on Pyro II for the Prophet, and she believes their claims to be nothing more than political propaganda.

Meanwhile, after a decade of intense research, Richards is ready to reveal an exciting new theory about the potential source of the Prophet of Pyro. “I’ve spent years cataloging all references to the Prophet of Pyro. When I charted them a clear pattern emerged. Interestingly enough, stories of encounters with the Prophet seem to spike significantly when strong solar flares strike the system.” Richards’ research showed intense solar flares hit the system when Pyrotechnic Amalgamated miners first heard the voice and occurred again in 2678 when Tufo Fitzhugh claimed to have experienced her revelation. Is it merely coincidence or a potential key to unlocking the mystery behind the Prophet?

Richards admits she wasn’t the first to ponder this connection. One Pyrotechnic Amalgamated technician had presented this theory in a message to company executives, stating that the mysterious voice might be the result of an auditory anomaly caused by the interplay between intense solar flares and the metal rich mine. Richards uncovered the exchange during her research, but her initial inspiration came from a more modern source. “It started when I was researching the Fire Rats for an article on the behaviors of cult-like gangs. It’s widely known that one of the Fire Rat’s initiation rites involves exposing oneself to a solar flare as a form of purification, but I also discovered that some long-standing members of the gang would vanish during times of intense solar flares. So I set out to see exactly what they were doing.”

What Richards discovered, via dogged investigation and confidential interviews with current and former Fire Rats, was that “enlightened” members of the gang often visited Pyro II during times of intense solar flares to commune with the Prophet. “No one I spoke with would confirm if these journeys were to a specific location or simply the planet in general,” recalls Richards. “But seeing them make this connection inspired me to analyze the historical data around reported encounters and solar flare activity to see if it had any merit. After a decade of hard work, I truly believe there’s a connection.”

While the Fire Rats’ beliefs surrounding the Prophet remain a closely held secret, Richards’ research has led her to develop her own theory. “I don’t think the Prophet of Pyro is confined to one special mine on Pyro II. I believe that powerful bursts of energy produced by solar flares are somehow collected and amplified by large metal deposits inside the mines. Meaning, when conditions are right, the Prophet of Pyro can be heard in several spots across the planet.”

When Untold Tales returns, Kiana Richards travels to Pyro II during a period of intense solar flare activity to put her theory to the test. 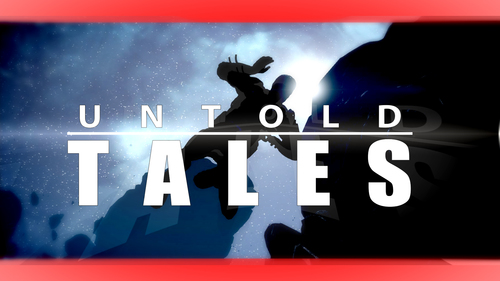