People turned out by the thousands to celebrate this year’s Citizen’s Day festivities despite a grim forecast of thunderstorms in the area. The festivities began under a curtain of light rain but nothing could dampen the crowd’s spirits as the first Holos made their way down the parade route. When the Magnus-born group of hitmakers, the Roommates, took the stage the sky had darkened to the point that lead singer, Carl Crow, described it as “apocalyptic.” No one was about to leave though and the band rewarded them for it, playing a nearly ninety-minute set.

Organizers were initially apprehensive about continuing, fearing a repeat of the Citizen’s Day Parade back in 2935 when unseasonably high winds caused over half a million credits in damage to the floats. Ultimately, after reviewing the forecast and consulting with experts, they decided to push forward with all planned events despite the inclement weather.

Davien’s own Senator Will McCain took time away from his campaign trail to give the opening address.

“Today is a day where we celebrate community. Celebrate the notion that, as Citizens, we are committed to building a better universe for our children and our children’s children. What I love, looking out at the sea of faces gathered today, is the hope. Hope that even though the system’s not perfect, we aren’t going to sit back and complain. We are going to get out there and try to make it better, to do what we can to contribute to the collective good. And to those in the crowd who haven’t achieved Citizenship yet, I say this; keep trying. Your dedication is what it’s all about. That’s what inspires us.” 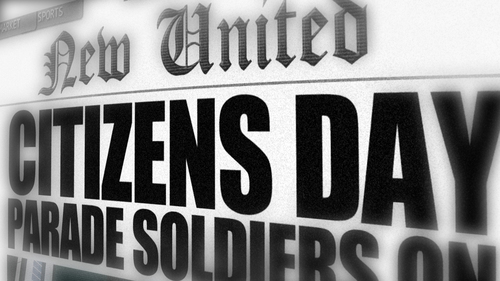