October was a hugely exciting month for players and devs alike thanks to our first digital-only CitizenCon. Naturally, this month’s report features work done for the event, but it’s predominantly packed with details of tasks completed and underway for content coming in the future.


Read on for everything from new ship updates to the latest from Pyro, and more.


AI Content
Last month, AI Content allotted resources to the upcoming Alpha 3.15 public release.
With healing and actor status in the coming patch, the team completed the ‘hospital respawning experience’ AI behavior and usables, which includes the doctors and nurses that greet players when they wake up in a medical bed.
A prominent example of the actor status system can be seen when buying a drink at a bar and getting drunk. So, AI Content took the time to fix many of the long-standing issues players have been experiencing.
“Earlier in the month during CitizenCon, we were pleased the public could see the worker behavior, artifact vendor, and a portion of our upcoming security behavior.” – AI Content Team
AI Features
AI Features spent part of the month working on the experience and responsiveness of some of the behaviors in the PU. For example, combat perception reactions were improved, including a few scenarios where the initial reactions were not playing correctly. They also managed to make the queuing of reaction animations when characters are using a usable more robust.
The team tweaked friendly fire to avoid unwanted damage and fixed the calculation used by NPCs to prevent them from shooting when friendly characters are in the way. Extensive analysis is underway on the various combat tactics to add better target re-evaluations into multiple scenarios.
On the vendor side, responsiveness was improved, and the team fixed bugs related to the scooching animation and bartenders serving patrons that already have drinks in front of them.
AI Tech
Throughout October, AI Tech continued their work on planetary navigation generation.
“The key elements for this month were about implementing an automatic way for requesting generation on the area surrounding the players, but we also worked on allowing the usage of the funneling algorithm to be used on the planetary navigation mesh triangles.” – AI Tech Team
The team extended the code for navigation links to allow for the creation of customization controllers. In this context, a controller is a generic piece of code that can extend how NPCs evaluate whether they can use a particular navigation link. For example, doors can have specific controllers to tell AI characters whether they are locked so they can be used correctly when pathfinding.
For ship AI, they concentrated on improvements to targeting and accuracy, improved the way AI use missiles in combat, and introduced ways to allow mission logic to force or request prioritization of a specific target. A PID controller was also implemented for accuracy that provides better results and makes it is easier to adjust based on AI skills.
Regarding the Subsumption editor, the team finished implementing functionality to dock different elements in the UI and save or load specific layouts.
Animation
Last month, the Animation team worked on various AI behaviors, including the nurse, vendor, bartender, bar patron, security guard, and cowering and hiding non-combatant NPC. Editing was also done on several female assets for Alpha 3.15 to give the world more life. Plans were made to improve the drunk locomotion set, which will help solve technical questions for the ‘heavily injured’ sets.
Development continued on the Shubin Interstellar mining gadget, with the team being sure to fix any visual issues with the select and deselect system.
Work continued on facial animations for all existing body animations, while progress was made on emotes and lines for various characters throughout the PU.
Art (Characters)
The Character Art and Tech teams spent October fixing bugs for Alpha 3.15 and progressing with content for various upcoming releases. Significant focus was given to updating the DNA archetype heads that will improve the quality of all character heads in the PU and Squadron 42. They also began developing a suite of new frontier-style outfits for the population of Pyro.
Art (Ships)
In the US, the Ship team cleaned up bugs and continued to polish various areas of the Crusader Ares, including several new paints.
The Drake Vulture reached the final art phase, with last month’s focus on habitation and the cargo hold.
One of the regularly mentioned unannounced vehicles continued to progress through the pipeline, this time getting a finalized UI layout and lighting pass. Part of the team then began the damage pass, while others transitioned to release prep.
Another new ship received its final tints and had bugs fixed throughout.
In the UK, three ships moved through the final stages of the pipeline, while the Banu Merchantman progressed through whitebox. The upcoming MISC Hulls continued development, with the A preparing for whitebox review and the C approaching greybox review.
Art (Weapons)
The Weapon Feature team began the month working on the Firestorm Kinetics Size 3 bombs for the Crusader Hercules and artwork for the upcoming ship tractor beam asset. They concluded the month on the mining gadget, proximity mine, and the laser trip mine.
Audio
The Audio Code team prepared for the final stage of Claudius audio software development, which was discussed by Audio Code Lead Graham and Sound Designer Adi during their Sounds of Space CitizenCon panel.
Finally, the team worked closely with composer Pedro Camacho on the score for Pyro to establish the tone and sonic palette.
Community
The Community team spent part of the month preparing for in-lore holiday Day of the Vara. This involved the Cave Runners and annual Star Citizen pumpkin carving competitions, while citizens could unlock the Hill Horror helmet for free by traveling to Jump Town throughout the holiday.

They then moved onto finalizing lighting for IAE, which involved taking the existing lighting and repurposing it for the new mood of the convention hall. Some areas only required small tweaks, while others received much more dramatic changes that the team hopes will provide a new and interesting experience for the community. 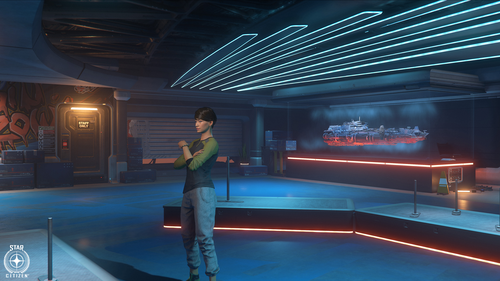 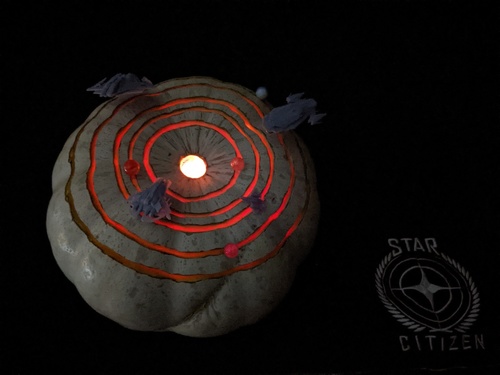 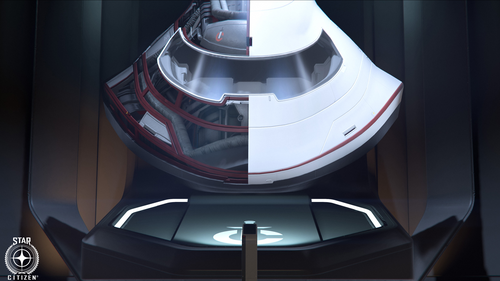