“Guilty,” the most senior judge of the Closed Tribunal Council announced her verdict with relish.

Always good to see someone enjoy their work, Gates thought. He was sitting alone in the darkened upper gallery of the tribunal court. Officially, he wasn’t even here. On suspension, he had no right to be present for matters presented here.

None of which had prevented him listening as Seabrook and a team of forensic data miners testified to Stroller’s crimes. Even before Seabrook had finished, Gates knew the judges would have no choice but to come to the proper conclusion.

Stroller started keening as the first judge passed sentence, “Gilles Conrad Stroller, in light of your conviction for treason and betrayal of the trust placed in you by the Navy, Citizens and state of the UEE, I sentence you to death by exposure to vacuum.”

Stroller was screaming denials as the second judge repeated the formula: “Gilles Conrad Stroller, in light of your conviction for treason and betrayal of the trust placed in you by the Navy, Citizens and state of the UEE, I sentence you to death by exposure to vacuum.”

The senior judge gestured at one of her clerks, who shut down the feed from Stroller’s cell. The convicted’s screaming cut off mid-squeal. The judge spoke for the record: “I concur with the sentence of my fellow judges, sentence to be carried out immediately.”

Strong emotions welled, mixed in him. Gates wasn’t all that clear on what he was feeling: satisfaction seemed too strong a word, as did vindication. He was, for lack of a better descriptor, at peace.

Getting up to leave, he saw Seabrook looking up at him from the lower gallery. Unsure what she wanted, Gates returned her gaze.

After a moment, Seabrook punched her chin in the direction of the exit.

He nodded, set out to meet her downstairs. His still-healing legs slowed him down, making it hard to walk, let alone hurry. The medboys said he’d done too much nerve damage too soon after his last stint in medbay. So much damage they considered it unlikely he’d ever regain full function. They had managed to replace the fingers he’d lost, though.

The other, though — the fear when I see a flight suit — don’t know if I’ll ever be able to put one on again, he thought, limping up to Seabrook.

He clicked heels, nodded to her. “Well done, Agent Seabrook.”

“Wouldn’t have happened without you, Gates.” She looked at his face, marked the spider web of fresh scars that would be with him for the foreseeable future. “Heard you had a rough go of it.”

He shrugged, gestured at the scars. “Just a little damage the medboys couldn’t clear up.” And because she deserved to know the full truth of it, he tapped his temple, “Aside from the psych pukes diddling around in here, I’ve been told I’m as well as I’ll get until my body decides to respond at the cellular level to further regenerative therapies.”

She didn’t — quite — manage to hide her wince. “But you did what you set out to.”

“Yes. I’m told that as soon as word arrived that the White Stag had been lost, the criminal organizations of no less than seven systems had sudden, violent changes in leadership or simply broke into smaller groups. We weren’t even aware Les Inconnus were in charge in a couple of the systems.”

She nodded, “I heard. What about IID? I heard Oda was dancing for joy when IID came to her with their investigation.”

Gates grinned. He’d seen the expression in the mirror, and knew that his scars assured the result was both lacking in humor and unnerving to the faint of heart. “Taken care of.”

He waved a hand, “I have friends in low places and dark, mysterious powers of my own.”

“Just because I like to work the field doesn’t mean I’m a stranger to the techniques necessary to get ahead in office politics. Likewise: just because I don’t use my powers of darkness to gain position doesn’t mean I can’t use them for important things.”

He gestured at his legs, “Not yet, but once I’m in shape to work, I’ll be at it again. Assuming Vasser will have me, of course.”

She smiled, reading his reaction well, “Not that I wouldn’t have talked to you on my own, she just wanted me to tell you these exact words …” her brow furrowed as she recited: “Problem solved, but is the solution now a problem?” She looked at him. “Do you know what she meant?”

“She wants to know if I’m ready to come back, and, when I do come back, will I be hunting the IID pukes that shut us down or ready to toe the line.”

“Those friends, the ones in low places?”

“They’ve found a nice, out of the way hole to stuff Agent Neustedt into. I’m told they run supplies in once a year, whether the inmates want it or not.”

“But why would Vasser be worried you were after them if —”

“Oh, he’s not finished answering to the Senate Subcommittee on Advocacy Affairs, so Vasser doesn’t know what’s about to go down, but I have it on solid authority that he will be surprised at the results of the session, right up to when they clap him in restraints.”

That startled a laugh from her, “No, you didn’t!”

“Remind me never to tick you off.”

She sobered. “I’m still assigned to the Black Box, but there’s been some rumor about a transfer to HQ, Cybercrimes Division.”

“And what do you make of this talk?”

She shrugged, “I don’t know. Not all that sure I have the sand for Special Action anymore.”

Gates shook his head, “Now why would you say that?”

“No one’s asking you to. Look, you’re exactly the kind of agent the Advocacy needs in Special Action.”

She opened her mouth to deny him, but he kept on going, “And I mean it. When I started talking about going off and doing what had to be done, you checked me, forced me to think it through. And when I declared it was the right thing, you got out of the way, even backed me because I was a fellow agent going into harm’s way. To my mind, you showed all the qualities Vasser and Special Action need. And that’s before giving you credit for keeping your head when we were trying to spring Morgan and everything went sideways. No, I think you are just what Special Action needs, Seabrook.”

Seabrook looked half-convinced. “But I couldn’t operate under that, what did you call it? “Separate Law.” I just can’t.”

“Not for nothing, but do you think there might be a reason I’ve been around as long as I have?”

She laughed again, “Because you refuse to stop?”

“Seriously, though, can you hazard a guess?”

“Because there are very few people who can do what I do. That can go out into the deep black and do the … things I do, then come back. Most people can’t —” he held his hands out, struggling to find the words, “— can’t get the stink off them enough to operate well under normal rules once they’ve gone off into the deep black. They go rogue, start wearing guts for garters, think they can make more money as hit men, that sort of crazy nonsense.” He looked Seabrook in the eye, “As many times as I’ve been made to step into the black, I’ve always come back.”

A deep sadness yawned wide in him. “Too stupid to live, too old to change, I suppose.”

She reached out, touched his arm, “That’s not an honest answer, not really.”

“No, it isn’t. Here’s a truth, though: when there’s someone who checks me at the airlock into the deep black, someone who asks whether what I’m about to do is right, it makes it a bit easier to find my way back. Someone like you, Agent Seabrook.”

She sniffed. Gates was pretty sure he saw the glitter of a tear before she looked away.
“Jesus, Gates, do you listen to yourself sometimes?”

“I try not to. That way lies madness.”

ABOUT THE AUTHOR:
Griffin Barber is a veteran police officer with a major police department. In his spare time, he tells fictional tales about far-away places and people he’ll never meet (mostly because they don’t exist). He’s had several short stories published in the 1632 Universe’s Grantville Gazette. His blog, The Ranting Griffin, is a good way to peek inside his skull, if you’re interested in such horrors. 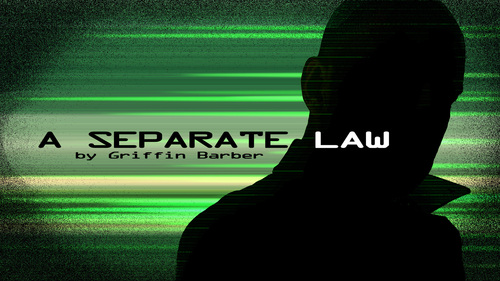