START FILE . . .
“When Do We Go Too Far?”
by. Hannigan Terrell
Unless you’ve been hiding under a rock the past week, you’ve no doubt heard of RSI’s latest ‘achievement.’ So let me recap for the rock-dwellers, they claim to have designed a machine that can “process the atmosphere of a planet to convert it to a sustained oxygen environment, making it habitable for humans.” In short, they’re talking about terraforming. Yeah, that’s right, the stuff of science fiction. I know everyone’s excited about the opportunities this presents but no one seems to be taking a breath and thinking what this really means.

So once again, it’s up to me to be the voice of reason in this techno hysteria. That’s right, dear readers, I’m going to ask the question that no one is asking. You ready?

If we can terraform a planet, why should we?

I’ll give you a second. Think about that. I’ll say it again, just because we can do something, do we have to? I know the pundits over at SSNtv like to poke fun at me, make me out to be a technophobe but I’ll tell you this, I didn’t have a problem with the cloning initiatives. I didn’t even have a problem with gene-coding to minimize inherited disorders and diseases. Those things were achievements to help make lives better. What is this for? What is it in aid of? At what point are we going too far? Seriously, we’re talking about restructuring the very air of a planet. The planets we’re talking about were formed like that for a reason. Who are we to assume that the universe wants us to mold planets to benefit us? We aren’t Gods and playing around with the fundamental fabric of a planet is arrogant and dangerous.

I know this is probably going to fall on deaf ears. The world is too high, basking in our own magnificence, but I promise you: Nothing good will come of this. 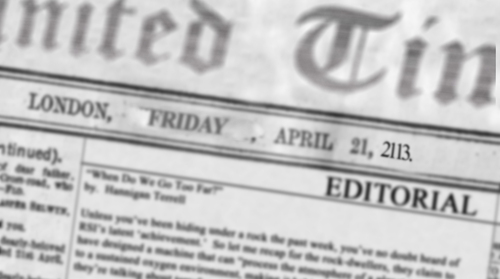