Blast from the Past: Times of Lore

It’s little-remembered today, but when Chris Roberts changed the world with Wing Commander in 1990 he was already a household name among gamers. His first title for Origin, Times of Lore, had been released in 1988 to excellent sales and critical acclaim. Like most Origin games developed before Wing Commander, Times of Lore was a serious RPG. In terms of story, the game followed the typical RPG path at the time, asking the player to choose among character classes and then sending him to locate and retrieve magic artifacts to save a kingdom. But that seeming simplicity belied a technological marvel: the game featured an impossibly intricate world map and boasted an unheard of lack of in-game load time. With that feat alone, Chris established himself as a master programmer.

The game’s biggest influence—one still being felt today—was more subtle. Earlier RPGs, chief among them Origin’s Ultima series, featured a text-based interface. The player would need to remember that you O-P-E-N a door, P-I-C-K a lock, T-A-L-K to an NPC and so on. As games became more complex, the number of commands multiplied. For times of Lore, Chris developed something far simpler: a mouse-drive icon-based interface. Instead of L-O-O-King at something you would click an eye, instead of T-A-L-King you would click on a mouth. Times of Lore managed elegantly with eight icons what contemporary RPGs and adventure games were doing with dozens of commands; perhaps the first indication of the attention to detail and cinematic styling that would be let loose upon the game industry a few years later… 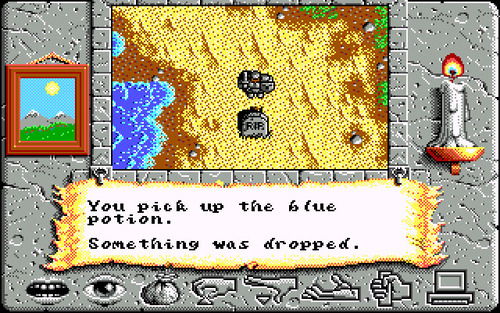