Alyssa Jamali was running late. She had fallen asleep last night while working on her Chem homework, now she had to dictate her Poly-Sci assignment on her way to class. High-General Messer had spoken at a memorial for the victims of the bombing attack on Cestulus and Mr. Kent wanted a one-page summary of the speech.
Dictation Start:
Alyssa Jamali
Poli-Sci/Kent/45Bcf
Assignment: Messer Speech

The systems are falling apart. Since the War ended, we are under attack from a new kind of threat, one that is not fought on battlefields or between carriers.This war is being fought in secret, with threats and sabotage.

That was the message eight months ago. Six terrorists attacks over the previous year had shaken everybody from the notion that the Tevarin defeat was going to lead to peace. People wanted answers but more importantly they wanted to feel like the Tribunal was getting control. They got neither.

The Advocacy never caught the perpetrators. They only knew that the bombs had been made in part from Xi’An technology. Meanwhile, the Tribunal debated a course of action to the point of inaction.

So the systems were falling apart. The Tribunal had failed. Humanity needed a leader. The solution? Elect a new position, Prime Citizen, to be a single voice, the deciding vote in an overwrought government.

Citizens from all of the systems began to run for this new office. Every week it seemed a new candidate would appear making the same promises. This went on for months. As the election drew near, High-General Messer put his name forward as a candidate. He spoke last night at a commemoration ceremony for the victims of the fourth Terrorist attack.

But there are enemies that want to cut us down. That resent our ascension. That want us to fall back from the stars. The vicious attacks on our systems are just the beginning. As a soldier who has stared into the horror of war, I don’t say this lightly. We have to protect ourselves. Protect our families. Protect our future. Protect our ability to claim what is rightfully ours.

I don’t want another war. Too many sons and daughters, husbands and wives, have already been lost in the deep vacuum and barren planets. But I will say this, I would ring every system and every jump-point with shields and wire a thousand kilometers thick if it meant we wouldn’t have to lose any more.

I have always been a soldier of humanity. Give me this chance to keep you safe, to keep the threats and violence of species not as civilized as us far away, so we can take our rightful place in the galaxy.

The crowd loved it. Listening to this speech now, High-General Messer speaks with a conviction that makes him easy to believe.

In short, I think he’s right. There is an inherent problem with three equal divisions of power. While it is preferable to have that discourse in times of peace, we are living in a dangerous time. Decisions sometimes must be made quickly and effectively. I know this sounds like the first step towards absolutism but the system is still in place. The method that they are suggesting still maintains the High-Secretary, General, and Advocate, and even the Senate but they all advise the Prime Citizen, who then makes the ultimate decision.

Like High-General Messer said after introducing the Prime Citizen Motion, “every ship needs a captain.” 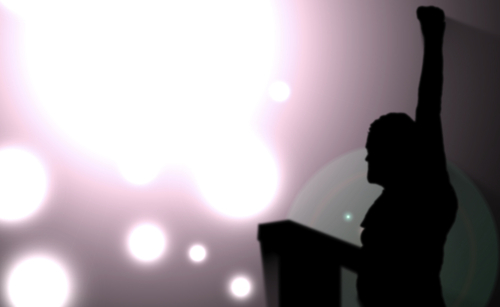