We’d like to begin by wishing everyone a happy Veterans Day (or Remembrance Day) to everyone today. We’re continually honored when we find out about men and women in uniform who have chosen to support Star Citizen and we can’t thank you enough for your service.

The big news today is that we’ve reached the $3.25 million mark and, as promised, we’re releasing the details on a new ship: the Starfarer tanker. Hopefully this description will help explain what all this extra money is going… expanding the Star Citizen world beyond the boundaries of the original Privateer or Freelancer and letting us make it a more vibrant, living universe. Keep going: you’ll get another star system at $3.3 million!

Builder: MISC (Musashi Industrial & Starflight Concern)
Crew (max): 2
Mass (empty): 125,000 KG
Focus: Tanker / Refueler The MISC Starfarer is the galaxy’s standard fuel transporter. Starfarers are ubiquitous on both sides of the fueling process: their massive tanks allow for both the collection of space borne fuel from gas giants and extrasolar sources as well as the transport of active fuel from refinery stations to the primary market. Though the stock model lacks refinery equipment, the Starfarer does have docking mechanisms allowing it to conduct in-flight refueling operations with most spacecraft classes.

The most common Starfarer modification ships liquid foodstuffs in the same tanking system. A visually distinct long-haul bulk goods version mated to an alternate cargo chassis also exists, although it has proven far less popular than the more rugged Freelancer lineup. An armored tactical variant, the Starfarer Gemini (“Star-G”) is produced under contract by Aegis for use by the UEE military.

Today you can see the bronze Citizen Card provided at the $125 level. Users can choose between a “Colonel” and a “Freelancer” card, a way to display their support for two of Chris Roberts’ earlier franchises. We think the cards start looking a lot cooler as they look more metallic… so just wait until you see the real metal cards available for higher pledgers! Facebook
We know a lot of you old spacehands aren’t fans of social networking and that’s entirely understandable. That’s why we always try and post the latest news to RSI first. Still, we’re proud of the fact that we’re almost to 10,000 “likes,” which is a metric that speaks volumes to outsiders… so, if you haven’t liked the Star Citizen Facebook page, we’d truly appreciate it. 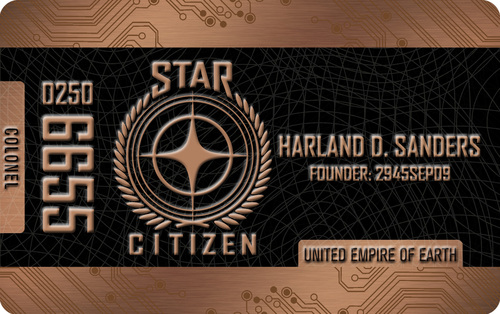 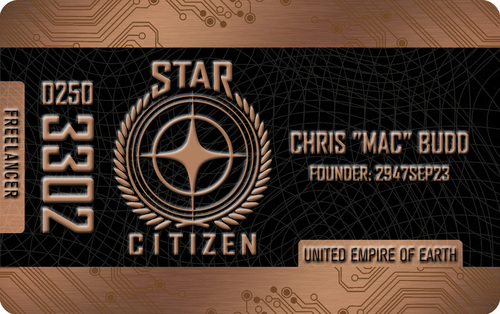