You’ve been asking to see some in game footage, even if rough, so I thought I would share a little video that shows off some of the preliminary AI work that’s been done. Some of this was functioning in the Game Developers Online reveal and some of this has been done since in between the craziness of the crowd funding campaign.

This video isn’t as polished as I would normally put out so please be nice as we’re 24 months away from anything that would be called final, and even 12 months away from just a multiplayer alpha dogfighting build. The laser effects, explosions are all placeholders and there will be significant work done here, as well as some very cool shield effects I have cooking up in the background. My goal with the visual effects is to use a lot the techniques and looks used in film work, which are now possible with DX11 and modern day PCs.

But the point of the video isn’t to show the VFX or damage systems, which still have a ways to go but to demo some of the early AI work that’s been happening in the background.

The Squadron 42 / Star Citizen pilot AI will be the most sophisticated AI that I’ve attempted on any of my games. My goal is to take the ideas that I pioneered with Wing Commander and later games; distinct personalities, dynamic learning, signature moves to next level with the power of modern CPUs.

We’re a long way off from the final article, but as you can see from the video AI can already fly in formation, respond to commands and engage in combat. All the dogfighting you see in this video is AI driven!

On a technical side this footage was captured with FRAPS via a debug camera on a PC with an AMD Phenom 1090T processor, 8GB and an NVIDIA GTX470.

As things progress we’ll have much nicer implementation of third a person chase and orbit cameras to show of the action better. In an ordinary game’s development cycle, this would be something we would share internally or with the publisher… but we’re showing our backers instead, since you’re the ones making Star Citizen happen! 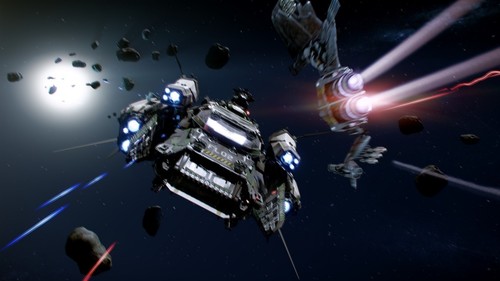