The backers at Kickstarter have unlocked an additional base type in Star Citizen: the hidden smuggler’s asteroid. (We’re technically a few hundred dollars short, but an Amazon outage has disabled Kickstarter payments… and why punish fans for something they can’t control?)

The asteroid bases will take on two forms: the first is active smugglers bases with trading and the seediest bars in the galaxy offering some of the most dangerous—and lucrative—missions outside the law. The second is secret supply depots that you can discover, raid and contest yourself. Their locations won’t be on any map, the stuff of legend and hearsay. You’ll learn about them at seedy mining bars or through tireless exploratory scanning of asteroid bases or even by outfitting your ship to stealthily follow successful smugglers. There you may find anything from a thriving smuggler community, an intergalactic bazar trading black market goods at great prices… or an abandoned cache of weapons and upgrades thought hidden in deep space by their previous owners. And once discovered, the abandoned worldlets could make for an excellent hidden squadron base… as long as no one reveals their location or follows you home!

At the $1.5 million level Kickstarter is going to unlock two additional flyable ship types which won’t be available through the main site’s progression. Origin M50 interceptor and the Drake Interplanetary Caterpillar armored transport (for salvage and… piracy.) We’ll provide specifications for the M50 at $1.375M and the Caterpillar at $1.5M. Meanwhile, we’re getting close to $3.7 million overall and another star system, and then a new ship at $3.75M. Contributions through Kickstarter will work towards both goals! 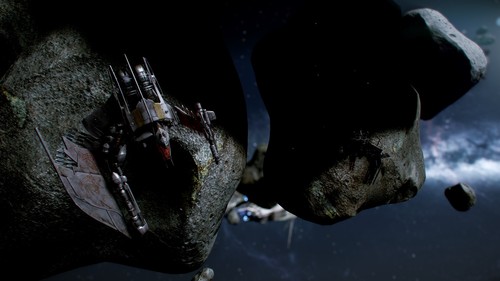