The battle is over and we—PC gamers, space sim fans, WingNuts, Lancers and the rest—have won. You’ve not only met every goal we set, you’ve exceeded them. Star Citizen will be released because of your dedication and your willingness to put your money where our mouths are. Our gratitude is immeasurable; we owe you our livelihoods and will not soon forget it.

The question is: what happens next?

Our intention has always been to make Roberts Space Industries YOUR site. It’s not a public advertisement for the game; it’s a private community for those who are making the game happen. We want your input on what we’re doing and we want to share our plans with you; the occasional passer-by doesn’t concern us. The plan was initially to immediately switch on a wall that would allow only you, our backers, to access features like the Comm-Link and the Spectrum Dispatches. Kickstarter has thrown something of a wrench in this plan: we can’t change the site until the Kickstarter backers are integrated, which may take up to two weeks, otherwise we would be blocking thousands of backers from participating.

Updates and features will continue, returning to a regular schedule in the next few days. The team needs a few days to collect ourselves and reform before jumping into the immense task ahead (after the last month, our husbands, wives, children and yes, pets, miss us!) We will also be launching new sections which have been in the works for some time: the Galactapedia will tell you more about the Star Citizen world, Engineering will introduce you to game mechanics that are being planned and Holovids will offer you video footage from the game as it takes shape.

What about pledges? Good news: those of you who got in on the ground floor are covered. Your ships have lifetime insurance policies and for the next year you will have the ability to purchase further tiers or upgrade existing ones at the initial prices. That’s not true of everyone else: if you want to back Star Citizen and participate in this amazing community, you still can… but it’s going to cost you a little extra as of now, and you aren’t going to have as many extras (no lifetime insurance, for example.)

One issue which concerns us is what to do with the funding tracker. So we’re going to throw the issue up to you: in two weeks, when the wall goes up, what do you want to see done with the tracker? Without the ‘push’ of the campaign it probably won’t update very dramatically… but it’s always possible it will go up enough to reach future stretch goals anyway. Should we keep it, remove it or put it somewhere else? We’ll let the community decide.

We also have previously outlined the ‘behind the screens’ subscription plans available now. They’re designed for users who simply want to give us a little extra support during the development—you’re getting the whole story, regardless—but we will have some extra fun for our monthly contributors.

We can’t thank you enough for everything you’ve done for this project. Please see the next update on ‘The Pledge’ for our promise to you. The next two years are going to be incredible for all involved and we’re thoroughly happy that all of you are along for this exciting ride. 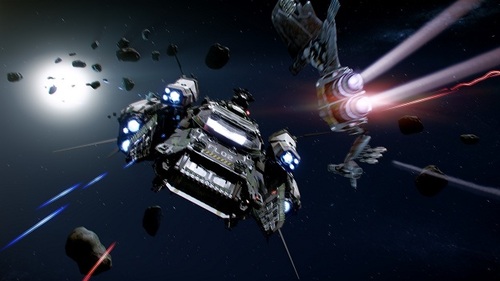 Bildbeschreibung: Results for the Counter poll