Onboard, they found copious data, modifications, and evidence of a life spent in the pursuit of criminal enterprise (specifically smuggling both cargo and sentient). Suspect was remanded to Advocacy Station Terminus until trial.

Not ten seconds after I entered the holding cell, Suspect Twor wanted to cut a deal. He is desperate to avoid a criminal sentence of any kind and is willing to disclose everything he knows about illegal transport, his contacts, and criminal syndicate networks in exchange for leniency.

He claims to have intimate knowledge of the following subjects but refuses to comply further until he has a proper deal exonerating him from past crimes:

Twor will explain the types of modifications the standard smuggling vessel will undergo, including but not limited to: dummy cargo holds and transport techniques as well as a list of mechanics that will make the conversions.

Apparently, there are very few specialty cargo holds designed and built for exclusively for smuggling. In order to elude detection, most smuggling holds are bought through legitimate dealers then converted to the smuggler’s specifications. Modifications can include scan shielding and/or the more expensive projection-shielding (making the contents appear as something legitimate on scan). For the smuggler elite, an underground engineer has been perfecting a new type of emitter that can actually dampen the effects of our scanners directly. Twor claims to have seen the tech in action but has not indicated whether he knows who this rogue engineer is or how to obtain his/her services. If true, we should alert all Customs and Border Agents of this new tech’s existence.

For a price, there are repair shops that can adapt almost any vessel for smuggling purposes. This process will effectively strip and rebuild the interior of the vessel creating hidden compartments and panels throughout the ship. While this operation cuts down on the overall cargo capacity, it does make it more difficult to find smaller contraband. Twor offered up one such shop as a token of good faith (Cass’s Haul & Trunk Repair, Idris System, Personal File Attached) but claims to know at least six more.

The foundation of smuggling is deception. Just as the act itself is the transport of illegal goods/beings under the veneer of legitimacy, the networks that profit from this transport are mostly hidden among ‘honest’ businesses and behind upstanding personas.

Smugglers make their living by knowing which businessmen, politicians, and law enforcement can be bought or traded with. Knowing the difference is the first hurdle for the would-be smuggler.

Transacting with ‘unconnected’ employers carries its own set of benefits/dangers. There’s always the chance that the employer is an undercover agent or that they could hire the smuggler to transport extremely dangerous or unstable material. Conversely, if the smuggler is unable to complete their contract, the ramifications are slight. Their employer might put a bounty on the smuggler but it will be small and avoidable. For this reason, most aspiring smugglers cut their teeth on unconnected businessmen in border worlds before elevating to career criminal status: The Syndicates.

According to latest studies, Criminal Syndicates generate twenty-eight percent of their revenue from the sale and transportation of stolen or illegal merchandise. Working for a Syndicate usually pays significantly less than independent contractors but you can rely on the Syndicates established network of corrupt officials and landing parks. While this may sound preferable, egregious failure to complete a Syndicate contract will almost surely result in an execution order. Not to mention the legal penalties are significantly higher if you are arrested in the employ of a criminal organization.

The transport of illegal goods through UEE territory is fraught with potential dangers. In Mr. Twor’s own words “Your ship is your life. You make sure that baby’s greased in all the right spots. Last thing you want is something mechanical to fail you when you need it.” The employed smuggler will have to evade police, scans, even other pirates.

In keeping with smuggling’s theme of deception, the average smuggler will employ breakaway hard-points to “not show their hand” as the Suspect puts it.

“I might have three, four additional thrusters on my craft but I ain’t gonna show ‘em off. I’m gonna hide ‘em. It’s all about perception. I want some skiff to think they got my number before I break out the show, you know?”

Agent Assessment: I would suggest that the Advocacy consider his offer. As we all know, smuggling is a fluid operation. For every advance or countermeasure we devise, they seem to adjust and carry on as normal. This would provide an opportunity to indict many of the rank-and-file smugglers, kidnappers, and fixers that operate throughout the systems as well as provide law enforcement officers with modern insight into the smuggler’s mind. 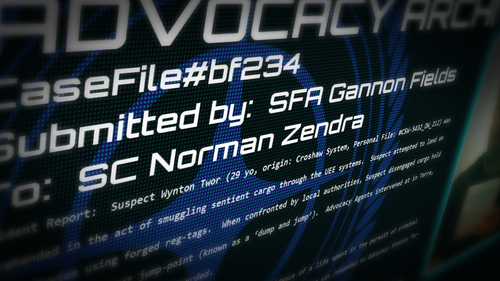