This portfolio originally appeared in Jump Point 7.4.
Although MaxOx has long been a distinguished manufacturer of energy weapons, the company’s path to prestige was unusual and controversial.

Ultimately, the company’s success can be credited to founder Burl Hitchens. Unlike many of his contemporaries in the business world, Hitchens preferred to let his work speak for itself and never got in the way of the assumptions of others. Many mistook his laconism as ignorance, including Messer-era scientist Derivia Borel, who called him a “frontier bumpkin,” a term Hitchens wore with pride and even claimed saved his career and company. When asked about it, Hitchens said the most important lesson he ever learned was when to keep his mouth shut. “If you’re boasting about being the smartest person in the room, odds are that you’re probably not.”

The Brilliant Bumpkin
Hitchens was born on Charon III in 2747. He lived on what he deemed “a Dellin dirt farm,” which downplayed his parents’ sophisticated hydroponics operation. He spent his days fixing machinery and helping his parents manage the farm while studying at night. Hitchens’ excellent Equivalency score landed him a full scholarship to the University of Rhetor.

Yet, the rigid structure of a formal education didn’t suit Hitchens, who didn’t care about grades and ditched classes that bored him. Instead, he obsessed over lasers, auditing advanced physics and engineering courses and spending hours experimenting in labs. His cavalier attitude eventually got him expelled after he failed to attend several disciplinary meetings.

Luckily, an old physics professor recognized Hitchens’ talent and secured him a job at a local research lab, where he distinguished himself with breakthrough theories on laser manufacturing. In an unexpected twist, his work proved so promising that the university that had previously expelled him offered him a research grant just years later. Hitchens would reject the offer and instead raise funds for a small staff and lab space on Reisse. Hitchens called the company MaxOx, a reference to a “maximum oxygen” warning sensor that his refined production method had the habit of triggering due to the atmospheric conditions it required to work. After various scientific spectrum outlets reported the lab’s opening, MaxOx went quiet.

Six years later, Hitchens emerged with one of the most powerful and precise surgical lasers yet invented. The device won devotees for its sleek and simple design and multifaceted functionality. Demand outstripped supply almost immediately. Then, the UEE government came knocking and changed the company’s course.

Duty Cycle
In 2778, Hitchens met with government officials and was shocked when they asked for help on a classified project. The officials were impressed with the superior power and precision of MaxOx lasers and claimed they could benefit the Empire in other ways. Thanks to poorly veiled threats from the officials, Hitchens realized that not accepting their offer would result in MaxOx’s patents being seized by the corrupt administration, effectively crippling the company. He reluctantly agreed to help.

Leaving behind MaxOx’s day-to-day operations, Hitchens and a few researchers relocated to a secret lab on Persei. Only then did military officials hand him the file for Project Vespa, a failed top-secret attempt to weaponize terraforming technology. Military officials wanted to repurpose MaxOx’s tech to create the ultimate capital ship weapon for the Vanduul front – a Kingship killer. Multiple weapon manufacturers had already failed to achieve the desired results and the military hoped Hitchens’ breakthrough laser tech might be the key.

Having grown up in Charon, Hitchens knew firsthand how the Messer government would do anything to stay in power and, once the weapon was developed, invariably turn it on those who opposed the regime. He pledged to make sure that couldn’t happen. At great personal risk, Hitchens began a balancing act of keeping his team productive but not effective in achieving their goal, while also not angering Derivia Borel, the bureaucrat and Messer crony overseeing the operation.

Thankfully, Borel thought little of Hitchens. Having taught at the University of Rhetor when Hitchens was expelled, Borel frequently dismissed his work, regularly referring to him as a “frontier bumpkin.” Hitchens played into this perception to explain project delays while presenting minor advancements to prevent his team from losing the project. After years of glacial progress and Hitchens’ strategically inflated budgets, Borel cancelled MaxOx’s government contract and hired a new team. Prepared for this eventuality, Hitchens left behind terabytes of data (much of it misleading, mislabeled, or completely fabricated) to impede any future progress.

While Hitchens was relieved to be returning to the private sector, he soon faced a new challenge. As retribution for failing to deliver, the Messer government made good on their threat and revoked the patents associated with MaxOx’s medical lasers. Hitchens would need a new product or face financial ruin.

Modulation Mode
MaxOx quickly updated their medical equipment to distinguish themselves from the new field of lasers made from their formally-proprietary technology and maintained a brief advantage before competitors significantly cut into their bottom line. The company seemed on the verge of failing when they were thrown a lifeline: in 2792, the Messer government was overthrown.

Once again, Hitchens found himself at a crossroads. His team had spent years researching weaponized lasers for the government instead of researching new avenues. Making matters worse, now that their patents were public, other companies had begun weaponizing their technology. Hitchens believed the only way to save MaxOx was to make the very thing he’d been avoiding. Months of intense R&D produced a prototype for the AA-1, the company’s first energy-based ship weapon. MaxOx’s energy weapons quickly found fans for their high-tech look and dependable performance. Under Hitchens’ guidance, MaxOx declined every offer to sell weapons to the military; their weapons would be for the people to defend themselves. Eventually, their line expanded to specialty weapons, such as EMP burst generators and personal protection. Meanwhile, scientists, researchers, and healthcare professionals expressed disappointment at the originally-medical technology’s weaponization. After Hitchens retired, MaxOx shuttered their medical and laboratory laser divisions due to low profit margins.

Today, most know MaxOx only as a weapon manufacturer, but their legacy remains much more complicated. Eventually, after Hitchens’ death, the executive board would reverse course and take government contracts for their products, yet many still associate their weapons with being the choice of private citizens. For better or worse, Hitchens always picked the survival of his company over everything else. Because of this, MaxOx still stands to this day. 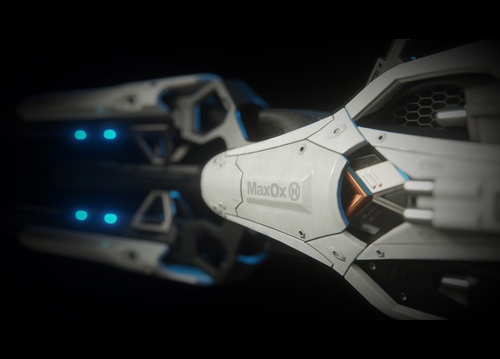