October was a busy month for Star Citizen’s PU teams, with Halloween content and prep for the upcoming IAE in-game event on most to-do lists. As usual, long-term development tasks continued in earnest, with new features, weapons, armor, and locations all making great progress. Read on for the details, including updates on exciting additions arriving in Alpha 3.12 and beyond.


AI (Character Combat)
We start with the Character Combat Team, who completed the first pass of the ‘surrender’ behavior mentioned last month. During their regular combat behavior, NPCs will try to find lootable ammo boxes (and in the future request help from friendlies and loot available weapons). If no options are available, they’ll try to stay out of dangerous environments and survive the best they can.
The team began implementing support for character traits. First, this functionality exposes the ability of selected traits in the Character Skills and Traits editor. Designers can then assign traits to templates that are assigned to characters. These traits can be used to either modify or enable specific behaviors available to certain characters. For example, a ‘coward’ NPC won’t try to put pressure on the player.
Several bugs were also fixed for visual perception, cover usage, and dodge reactions.
AI (General)
Last month, the AI Team found and fixed more issues related to characters standing on top of usables. This time, the problem was specific to characters streaming in before their usables. Code was added to handle this particular edge case. Some of the recent AI component updates were also amended with stricter dependency rules to avoid conflicting reading and writing inside the zone system. This prevents contention when reading entity positions.
AI (Ships)
Ship AI began October extending the quantum travel Subsumption task to be “non-blocking.” This will be used in specific scenarios where a behavior needs to queue quantum travel for a ship and then continue with regular duties, which is particularly useful in multi-crew ships.
The team continued to iterate on missile targeting, first of all ensuring turrets respond immediately to incoming hostile torpedoes when not in combat mode. They then adjusted targeting priorities to give a better balance when capital ships are fighting multiple targets. This will also improve how seat operators handle burst fire when controlling ship weapons.
Time was also spent improving how collision avoidance handles missiles, with the team filtering-out missiles in the code due to them not being part of collision avoidance. For the accuracy calculation, the team implemented different convergence speeds towards targets when an AI is hitting or missing the target. This simulates NPCs trying to hit a target faster when they’re missing but relaxing slightly when they’re on target.
The capital ship combat behavior was also improved to allow longer-range combat. NPCs will now react to an enemy starting to charge a weapon too.
Plus, several bugs were fixed and improvements made to the break-away movement request, the patrol-around-position assignment, and the hostility of specific targets.
AI (Social)
Last month, the Social AI Team moved the first version of the mess hall scenario into a state that allows other teams to better iterate on animations, props, and the technical setup. At the moment, the scenario supports usables that provide cutlery, food, and drinks. NPCs can iterate on food lines, retrieve anything their sustenance behavior wants, and then take the food to tables where it can be consumed. This involves both systemic animations and mo-cap created for specific scenarios. All of these usables are item providers, which means NPCs can search to obtain specific objects. These objects are physically used by the AI, so consuming food and drink impacts the NPC’s status system. This also expands the use of grip tags in the ‘take,’ ‘prepare,’ and ‘place’ use-channel.
The team are currently working on several behaviors that will benefit both the PU and Squadron 42, including arcade-machine use and dancing. Playing arcade machines will be one of the available leisure activities, while dancing will likely be a special activity for the patrons of discos and other appropriate areas.
Animation
Specifically for the PU, the team made progress with mission-giver posing and completed the facial animations for emotes, bounty hunters, general outlaws, and more. They also supported other team’s with mo-cap and continued to work through the backlog of animation tasks.
Art (Environment)
October saw the Modular Team wrap up work on the refinery decks, including finalizing the art and putting the finishing touches to the dressing and world-building. The decks have now been handed over to the Audio, Lighting, and VFX teams for final polish work.

Elsewhere, the Modular Team continued adding gas clouds to Lagrange points.
“These are really benefiting from the first lighting pass with some absolutely gorgeous final frames being produced. The team have been working hard with Graphics to ensure the clouds remain performant enough for use in the multiplayer environment of the PU.” -The Environment Art Team
The team also began final art on the ship-to-station docking lobby and exterior. Pre-production work also kicked off for the brand-new ‘Colonialism’ ground-base archetypes.
The Landing Zone Team continued with Orison, with the greybox of the industrial platform making great progress. The commercial platform art greybox is almost complete, with some areas being brought up to final art to act as a benchmark for the rest of the location. The transit barge is nearing art complete and has been fully implemented into the level, with several currently moving between the platforms. The spaceport also moved into final art. Alongside Orison, the art prototype for the hacking feature had its first pass and is awaiting implementation and iteration. Work on the convention space for this year’s IAE was also completed. New informational screens were placed in landing zones to tie into upcoming events and existing screens were updated to be more dynamic.
In Frankfurt, the Organics Team finalized art for Pyro’s celestial bodies, though another round of polish will be undertaken before release. More work on Crusader was done alongside tech changes for gas giants, which will also benefit regular planets. Time was also spent prototyping touch bending for foliage and object buoyancy for floating assets on planetary water bodies.
Art (Ships)
In the UK, the Art Team continued with the Crusader Hercules. October’s work included further development of the engineering section and bridge, both of which are approaching the end of their final art phases. Exterior-wise, materials were polished and the landing gear is now final-art complete.
The iridescent shader created for the Esperia Talon is ready for implementation, as is Shrike’s internal missile system. The landing gear and damage setup were also finalized.
The US-based team progressed with the Crusader Mercury Star Runner, including finishing LODs, UI panels, the cargo area, and cockpit. In celebration of in-lore holiday Day of the Vara, the Ship Team also created the Ghoulish Green skin for the Drake Cutlass Black.


The Vehicle Tech Art Team focused on supported the Mercury with hardpoints, pivots, landing gear, viz areas, and damage states. Work was also done on the Origin 100 Series’ landing gear and small updates were made to the Cutlass models.
Art (Weapons)
In October, Weapons Art completed the first pass on the medical gun, ‘LOD 0’ art for an upcoming Behring LMG, and a new Gemini sniper rifle. The latest Behring S10 turret was finalized too. The team are nearing the end of their pass on weapon reticles, which will add zeroing and rangefinding along with various art tweaks. Art for the Multi-Tool’s tractor beam attachment was completed, as was a new set of Klaus and Werner holographic sights.
Audio
Last month saw Audio focus on the Crusader Mercury.
“Such a large ship with so many moving parts requires all of our sound designers working on it at once!” -The Audio Team
Code-wise, they continued to improve the music system, and progress was made on the team’s proprietary internal tools.
Backend Services
Backend Services spent part of October identifying and addressing issues in the recent patch release, including correcting primary hub crashes. Some low-level backend networking code was also cleaned up, which improved stability and will contribute to having more concurrent players online. Bugs in the various loadouts, inventory, and mobiGlas were fixed too.
Characters
The Character Team began the month working with the AI Team on creatures. This involved creating quick blockouts to check scale, assess model issues, test rigs, and iterate on ideas.
The team’s modelers and tech artists worked on two new armor sets targeted for 2021 and Subscriber Flair items planned for release in Alpha 3.11.1 and 3.12. They also addressed issues with the recently released vintage navy uniforms – these fixes will be live in the upcoming Alpha 3.11.1 patch.
Concepts for three full sets of armor were further developed that will support mining and bounty hunting gameplay. They’re currently concepting paired backpacks for these sets in support of the external inventory.

Community
Last month, the Community Team focused on preparations for the Star Citizen Birthday celebrations. This year’s celebration was entirely digital, with the free 2950 Birthday Goodies Pack gifted to all backers. They also supported the Birthday AMA, where Chris Roberts, Todd Papy, and Tony Zurovec answered player questions on Spectrum. The 2020 AMA Recap was also published for players that missed the live event.
The Community Team supported Narrative with the UEE Imperator Election, creating the Imperator Election Comm-Link and setting up the election ballot. They also announced the S-38 ‘One Empire’ pistol that commemorates the $300m milestone reached earlier in the year.
They then supported the UEE’s Halloween equivalent, Day of the Vara, with short story and pumpkin carving contests. Finally, they celebrated the arrival of the first two in-game-only earnable items in the PU.


User Interface (UI)
Some of the UI Team’s programming time was dedicated to bug fixing and supporting various game teams with upcoming releases. The Tech Team worked on lighting for Building Blocks, which will enable better-looking ship models. The artists developed concepts for the new docking UI and created visual target concept images for a new helmet visor and lens interface. Supporting artwork and screens for the upcoming refinery decks were also completed.
VFX
The VFX Team working on several ships last month, including the Crusader Mercury. They also continued to iterate on ship weapon effects, with particular attention paid to readability at distance. They did the same for missiles, allowing the trails to appear for longer. They also continued with SDF shield impact effects.

WE’LL SEE YOU NEXT MONTH… 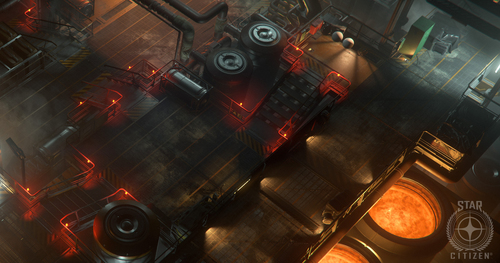 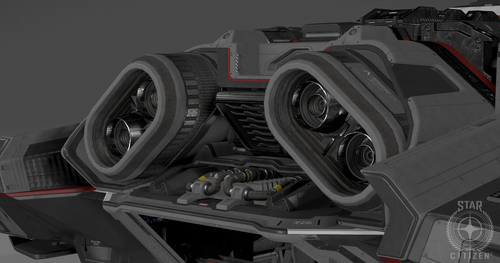 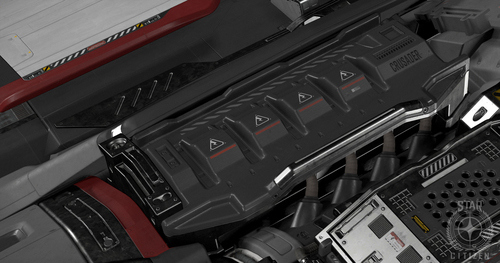 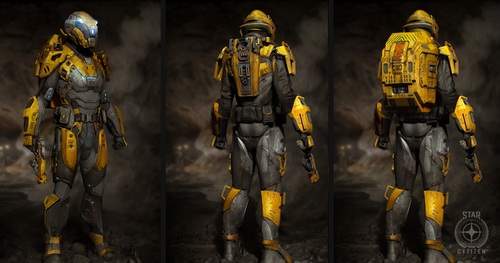 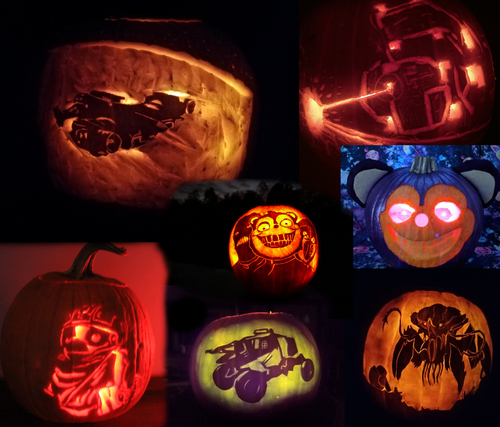 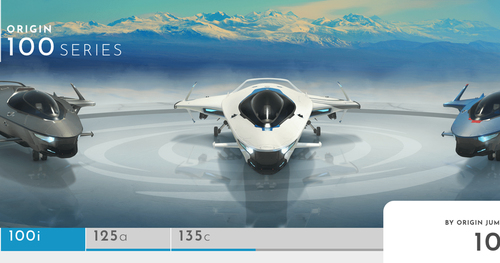 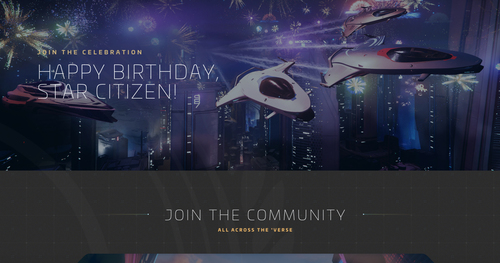