This portfolio originally appeared in Jump Point 9.1.
“A system’s best defense will always come from its residents.”

Bryce Balewa argued this point for years before becoming a leading proponent for the Civilian Defense Force (CDF), a volunteer militia called upon by the UEE military and Advocacy to provide support during times of crisis. Until the CDF’s creation under the Military Mobilization Initiative (MMI), most local militias and concerned individuals found it so difficult to coordinate security or relief efforts with UEE forces that they didn’t even bother. Instead, they organized their own efforts and frequently argued with Empire forces over jurisdiction and the extent of their rights. Thankfully, the CDF streamlined a way to coordinate support with local forces to provide a faster and more robust response to serious security issues within a system. Whether it’s defending shipping lanes from raids by increasingly aggressive outlaw packs or running relief to those affected by natural disasters, the CDF has quickly proven to be a vital part of system security; and one that Balewa wishes was around when he was still an Advocacy agent in Ferron.

Special Agent-in-Charge (SAC) Bryce Balewa spent over a decade assigned to the Ferron System. He watched as criminal syndicates increased their influence and authority by taking advantage of the system’s crumbling infrastructure, ineffectual local law enforcement, and underfunded Advocacy branch. Knowing that it would take more than just a few arrests to make a difference, he spent his time cultivating leads and earning the trust of well-placed sources able to supply him with valuable intelligence. In 2941, SAC Balewa penned an extensive report outlining the devastating economic and security impacts that would come from the criminal syndicates in Ferron continuing to operate. So, when he heard that the Voiders had plans to establish a base in Ferron to significantly grow their criminal empire, he knew exactly how dire that would be.

SAC Balewa confirmed the rumor with multiple sources and received further details about the Voiders’ plan to overrun a decommissioned Gold Horizon space station. He hurriedly drafted a request for additional forces to protect the out-of-commission space station and sent it up the Advocacy’s chain of command, only for it to be denied as too costly and dangerous. SAC Balewa understood defending the station was vital to long-term system security and would be exceedingly difficult with his current forces based on the strength-of-numbers reports he’d received on the Voiders. He appealed to Ferron’s Section Chief (SC) Jolena Hurley to allow him to coordinate with local militia forces to repel the attack. With Ferron’s local law enforcement severely understaffed and underfunded, the system’s local militias were often a bigger and better equipped option. SC Hurley agreed but noted that current policy required that anyone directly aiding or receiving intelligence from the Advocacy must be vetted and verified through headquarters on Earth. Instead of preparing for the attack and strategizing with his local contacts, SAC Balewa was forced to screen the locals, costing him a huge amount of time, only to receive word that the Voiders were already insystem and the overrun of the space station had begun.

A small Advocacy force led by SAC Balewa raced to the space station. With the attack officially underway, he contacted local law enforcement asking for support but a strategic decoy action by a small Voiders force on the other side of the system had them engaged. Unable to officially organize a response with local militias, SAC Balewa led his small force to the station only to be met with heavy resistance. The Voiders had time to establish a perimeter and override control of the station’s turrets to target the Advocacy. SAC Balewa’s force suffered several casualties before being forced to retreat. Livid at the loss of life and lack of institutional support from the Advocacy on any level, SAC Balewa immediately submitted his letter of resignation and commed his local contacts to see how he could help.

BETTER TOGETHER
Balewa spent the next few months working with local Ferron forces on ways to curb the expanding influence of the Voiders, but it was to little avail. This experience combined with his extensive knowledge of the Advocacy convinced him that a strong and trusted partnership between not only local security forces, the Advocacy, and the Navy, but also skilled individuals, would be the best security option for the system. In 2944, Balewa gave a speech at the Civilian Security Summit on this exact subject and was approached after by Amanda Xiang, a prominent lawyer and militia rights activist. Over drinks in a hotel lobby the two became fast friends. They realized their experience and approaches were different but their ultimate goal the same – keeping systems safe and secure for civilians and commerce. That night they decided to combine forces and the idea of the Civilian Defense Force was born.

Born and raised in Bremen, Amanda Xiang saw firsthand how a strong local militia, like the Bremen Defense Force (BDF), could benefit a system’s security. She joined the BDF while attending university and after graduation dedicated herself to protecting and expanding the rights of militias in Bremen and across the UEE. Prior to meeting Balewa, Xiang’s deep political connections and expertise on militia laws landed her a prominent spot as a security consultant on the Militia Mobilization Initiative (MMI), legislation intended to streamline the sale of military spec ships to civilians. Yet Xiang believed the MMI could be so much more and pushed for the legislation to include a section formalizing a partnership between the Advocacy, Navy, and willing civilian forces. Her years as an active BDF member showed her the issue from the other side. The Advocacy often rebuked offers from the BDF to support their operations or argued over exactly how they could help without interfering in official Advocacy business. Now, with a former Advocacy agent in her corner, she could tap into Balewa’s extensive institutional knowledge to craft such a plan that made sense for both sides.

Together Balewa and Xiang drafted a proposal creating a Civilian Defense Force (CDF) so locals, either independently or as part of a militia, could be quickly deputized as provisional law enforcement officials in times of an emergency. It would not be a standing force, only one called upon when needed the most. Xiang handled the legal hurdles while Balewa shaped it in a way that wouldn’t compromise Advocacy sources or sovereignty. With Xiang solely focused on how militias and civilians could be called upon to help defend their system, Balewa pushed for increasing the CDF’s scope to include assistance for humanitarian causes to attract wider political support. While their proposal quickly found favor among several Senators, it had to pass the Senate Defense Committee before being added to the MMI. Balewa and Xiang were unsure if they had the votes when the committee met to debate the matter and were surprised to see Advocacy Director Thomas Carmody, not one of his deputies, appear to voice the Advocacy’s position. While the transcripts from the closed-door session remained sealed, Director Carmody allegedly expressed several concerns. Sources close to Director Carmody claim he disliked the policy but, with crime rates soaring and the Advocacy budget frozen due to the expensive Vanduul war, he had no other options to help his agents in the field. When the committee agreed to adjust the policy based on his recommendations, the Advocacy officially endorsed it, paving the way for the Civilian Defense Force to be created in January of 2947.

SUPPORT FORCE
After months of intensive planning, the first official comm for help from the Civilian Defense Force came to evacuate people on Tangaroa (Helios II) from areas threatened by sudden and intense volcanic activity. To date, it’s been invoked nearly 50 times to rally civilians to defend shipping lanes in Hadur from attack, deliver foodstuffs to those affected by the Fora famine, and more. Despite many successes, critics of the program claim the vetting process for civilians to join is too lenient and bounty hunters have argued it floods high risk sectors with untrained and unprepared civilians that often make situations worse.

While Balewa and Xiang agree that certain aspects of the CDF can be improved, they remain energized and optimistic about its future. They believe the Empire should rely on more public and private partnerships that get people directly involved in its future. As they see it, the CDF increases civic engagement and has become a beacon of the people’s power to overcome adversity when they work together. 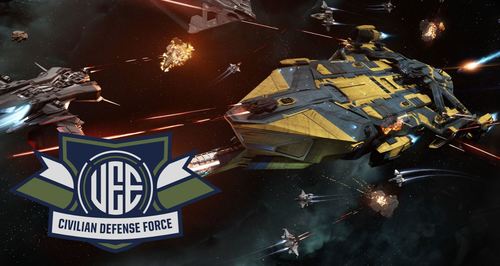