This portfolio originally appeared in Jump Point 9.9.
Editor’s Note: This portfolio is not intended to glorify or condone the Nine Tails. Instead, it’s meant to educate readers on their actions and areas of influence. Only by fully understanding the operations and motivations of criminal organizations like the Nine Tails can we stop them from spreading their influence further across the UEE.

“Organized and absolutely ruthless.” Detective Alsup used those words in 2938 to summarize the first Nine Tails attack, an incident that left 28 Terra police officers dead. Despite the heavy toll on law enforcement, only one of the assailants was found dead on the scene, wearing gear marked with a snake entwined with the number nine. The then unknown symbol circulated widely before an informant identified it as belonging to a mysterious new gang calling themselves the Nine Tails.

Since then, numerous reported heists and attacks have been linked back to the group with increasing scope and frequency over time. Despite their growing reputation, little is known publicly about the gang or its inner workings; making the group’s meteoric rise to power only more worrisome to organized crime experts. Today, the Nine Tails gang operates almost exclusively within the Stanton system, using the infamous derelict space station known among locals as ‘Grim HEX’ as its headquarters.

A former Green Imperial Housing Exchange used by miners working the asteroid belt encircling Yela (Stanton 2c), Grim HEX is technically owned by Crusader Industries. They acknowledge the Nine Tails presence but claim the gang isn’t their issue alone, and refuse to wrestle control of Grim HEX away from the gang unless aided by the Advocacy or the system’s other governing mega-corps. According to a 2950 Crusader statement, “piracy within the Stanton system needs to be addressed as a whole when other jurisdictions sit only a quick QT away.

As the influence of the Nine Tails criminal organization expands, investigators continue to try to understand the gang’s inner workings. While money appears to be the gang’s main motivator, the logic behind some of the Nine Tails’ operations remain anomalous, leading one organized crime expert to describe the group as “credit-craving professional anarchists.”

FIRST STRIKE
The Nine Tails have come to specialize in savage attacks with enigmatic motivations, a deadly and unnerving mixture that goes all the way back to their first attack. Racketeering and piracy were just two of the many corruption charges Albert ‘Sinkhole’ Holden faced for leading Prime’s Rangda syndicate for over a decade. This notoriety earned him a sentence of solitary confinement in an off-world detention center, but he wouldn’t ever make it there. Nine Tails ships swarmed the transport once it was ripped out of QT above Terra. A coordinated attack quickly destroyed all Terra PD ships except the prison transport, which was disabled and boarded. Utilizing expert precision, well-practiced tactics, and the element of surprise, the Nine Tails stormed the transport and killed all police officers aboard. They then freed Holden from the stasis pod and fled.

Considering the professional behavior of the attackers, investigators were surprised that the gang left one of their own, who had been killed in the exchange with the guards. Police initially assumed the unknown snake symbol on their gear was a red herring, as investigators believed the Rangda syndicate carried out the attack to spring their boss. Yet a day after the attack, the case took an unexpected turn when Holden was found shot in the head and floating in space. Why the Nine Tails sprung Holden only to execute him later remains a mystery.

Weeks passed before the first solid lead came when the same snake symbol was spotted by cameras during the hijacking of a Caterpillar loaded with valuable resources in Magnus. Over the next several years, the gang became more and more prolific and were linked to incidents in over a dozen systems that involved abductions, murders, robberies, and destruction of personal and private property. Predicting when and where it would strike proved nearly impossible. Then, in early 2942, incidents involving the Nine Tails suddenly stopped. Law enforcement officials secretly hoped internal divisions might have finally ripped the gang apart, but it was only planning its next move.

SAFE HAVEN
Reports of renewed Nine Tails activity began coming out of Stanton in 2943. Accompanied by rumors within the outlaw community that the gang now controlled a defunct housing exchange nestled in Yela’s asteroid belt. Before their arrival, squatters and small-time criminals called the ominously nicknamed Grim HEX home. They put up little resistance to the Nine Tails takeover. According to sources, anyone who opposed the gang got tossed out an airlock, while those offering no objection were allowed to stay and potentially prosper.

Under Nine Tails control, Grim HEX has become a hub for illegal activity in the Stanton system, with black market trading and gambling flourishing aboard the station. The gang is also believed to be behind the general rise in crime throughout the sector. It’s gotten so egregious that Crusader CEO Kelly Caplan was called before the Senate to explain the company’s security failings. Outside observers have accused Crusader Security of avoiding direct confrontation with Nine Tails out of fear over how the gang would respond. If true, this reinforces just how powerful the gang has become.

Why Nine Tails transitioned from a highly effective and elusive strike team into a Stanton-based force remains a mystery. Steady credits is the easy answer but some experts have wondered if the gang might have bigger plans in the works. Recently, the gang proved those experts right by blockading a rest stop with a powerful dampener that made quantum travel impossible near the station, grinding commerce to a halt in the sector. The Nine Tails were so effective that the lockdown was only broken after Crusader Security Director Sasha Rust instituted an emergency recruitment drive to bring security contractors to the station’s aid. The Nine Tails motives for this attack remain unknown.

Nine Tails may now primarily operate in the Stanton system, but it is emblematic of this age of crime. Its quick and calculated rise to power, alongside its ability to keep the gang’s inner workings a secret from investigators, only proves how truly dangerous it is. 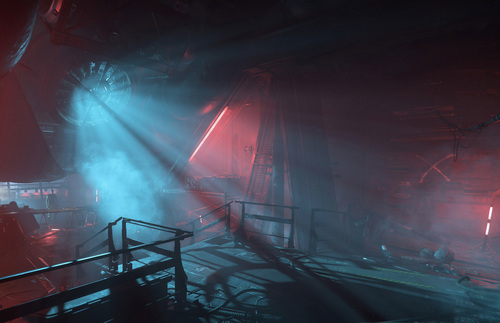