< Transmission Begins >
What does it take to get to the truth? Does it take a fancy education? No. It takes a willingness to ask questions. To look underneath the few facts those in power choose to share with us. It takes bravery. Because the truth is often dangerous and frightening. But bravery isn’t the absence of fear. It’s conviction in the face of it.

My name is Parker Terrell, and this is the Plain Truth.

Throughout my career I have always been dedicated to rooting out the truth. But I’ll be the first to admit that today’s story tested my resolve. Is sharing this story worth the risk to myself and my livelihood? The risk to all the people who depend on me? The answer? A resounding yes. Nothing should stop the truth.

A little over 60 years ago, a group of Hurston Dynamics employees came together to lobby for better working conditions. These workers were underpaid, overworked, and callously subjected to noxious, hazardous chemicals while on the job, with only the barest safety standards to protect them. They called themselves the United Workers of Hurston, or UWH, and bravely organized peaceful protests in an attempt to open dialogue with Hurston executives.

But these days, the UWH is better known as an extremist group. Their nobler aspirations have given way to campaigns of fear and intimidation. The group have claimed responsibility for numerous violent assaults on Hurston production facilities, several of which have even taken innocent lives. But when did everything change? How did they stray so far from their peaceful attempts at changing Hurston policy?

For many, myself included, the group’s turning point can be defined by a single incident. Of course, I’m referring to the Lastal tragedy of 2937, when a group of UWH members violently seized control of a Hurston cargo transport. During the standoff with local authorities, they quickly paraded their hostages in front of cameras broadcasting across the Empire and made their grievances known. And to demonstrate their conviction, they flew over Lorville and pushed the pilot out of the ship, sending him plummeting to his death below. Shortly after, Hurston Security forces executed a raid on the ship to retake control. All of the UWH members were killed along with three more hostages.

In the aftermath, public sentiment quickly turned against the UWH, and Hurston Dynamics declared the group a terrorist organization. From heroes of the people to the most reviled group across the UEE, just like that.

Of course, the UWH didn’t disband. They simply went underground to avoid further persecution. And when the group would eventually emerge again from the shadows, violence became their calling card. Sure, certain factions within the organization continued to pursue more peaceful methods of protest and attempted to distance themselves from the more militant cells, but the damage was done; public opinion was firmly swayed against them.

Like many others, I remember empathizing with the UWH in the early days. Mega-corporations like Hurston can run roughshod over common folk with few obstacles. I used to think it was brave of the UWH to stand in its way – to fight for better treatment. But after their seizure of the Lastal, I could not condone their actions. They were no longer brave, disgruntled workers suffering under the tyranny of the rich and corrupt. Just like you, I was convinced they were violent and dangerous criminals. That was what I believed. At least, until a few months ago, when I received a comm from a Hurston employee. The contact chose to remain anonymous, identifying themselves only as Canary. And what they told me shook me to my core. According to them, Hurston had manipulated the UWH, intentionally driving the organization to violence in order to give the company the legal foothold needed to ban the group.

It sounded crazy, but the case Canary made was damning. Although this was a bombshell, I still had questions. Who is Canary? They clearly came to me for a reason, so why wouldn’t they disclose their identity? Without that disclosure – without that trust – how could I justify sharing anything I learned? And yet, what if it was all true? I had to know the full story.

Canary explained to me that once the UWH started garnering support from other Hurston Dynamics employees across the ‘verse, the board of directors started to get nervous. But it wasn’t until the group’s messaging began to inspire pressure for change outside of the company that they realized the group’s true danger: such a large number of employees organizing would have a severe impact on their profits! Is it such a leap to assume that a company as callous as Hurston might take steps – even drastic ones – to protect its bottom line? I don’t think so.

Canary said that, in a sort of preemptive retaliation, Hurston Dynamics began to target individuals it knew to be part of the UWH and aggravate them, withholding pay, neglecting safety standards, and even being as petty as to saddle simple procedures with bureaucratic red tape. Even worse, Canary claimed that Hurston escalated its attacks by sending its own loyal agents undercover into the UWH to further radicalize the group from inside. Canary claimed that it was Hurston’s own infiltrators that began to push for the UWH to adopt more violent methods.

Take a moment. Think about that. Think about the ramifications of it. Could this mean that Hurston Dynamics was ultimately responsible for the Lastal tragedy? If we believe Canary, then maybe the empire owes the UWH an apology. How many of the people involved in the Lastal incident weren’t actual members of the UWH? How many were Hurston operatives, intentionally making the situation worse? If the company was willing to incite such violence back then, what about today? Is Hurston letting the angry and violent factions of the UWH operate in order to fulfill some darker agenda? Could it be directing them; choosing the UWH’s targets for them, creating whatever narrative most benefits the company?

Unfortunately, all these questions and more went unanswered; the investigation remained incomplete. I have not heard from Canary since our last conversation and though they provided names, dates, and events that verified they were likely a Hurston employee, I never learned Canary’s true identity.

I realize that sharing this information may seem irresponsible and will likely paint a target on my back. But Canary was brave enough to contact me. And so I have chosen to be brave, too. And I hope you will do the same. The more you share the truth, the harder it is to hide and cover up.

When we come back, we’ll explore Hurston’s history with the UEE and its connections to senators across the ‘verse who have a lot to answer for. 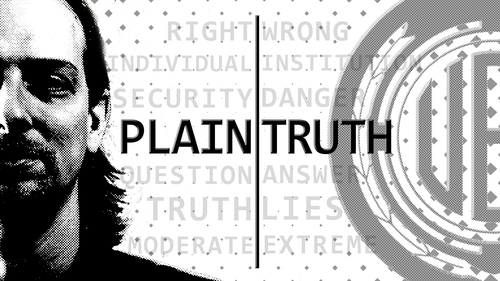