Lars Gonall: Welcome to Spectrum Spectator! The show where we watch and review what’s popular and new on spectrum so you don’t have to. I’m Lars Gonall and with me as always is Daisy Wences.

Daisy Wences: Why, Lars? Why did I ever agree to do this show with you?
Lars Gonall: Because being paid to be snarky about stuff on spectrum was literally your dream job.

Daisy Wences: Then be careful what you wish for because preparing for this week’s show made me want to do something I never thought possible: turn off spectrum, step outside, and go for a walk.
Lars Gonall: So this was the week that put you over the edge? Anyone in the office pool pick January 2950 for when Daisy would finally get sick of spectrum?

Daisy Wences: Never said I was sick of spectrum, just what we watched this week. Also, side note, I still don’t think it’s fair that I’m not allowed to participate in that pool.
Lars Gonall: It absolutely is. You’d compromise its integrity!

Daisy Wences: Speaking of compromised integrity, let’s start by talking about the campaign vid that exploded across spectrum this week. How about that transition?
Lars Gonall: Such a pro.

Daisy Wences: Thank you, but guests at a Ferron rally for hopeful Imperator candidate Marat Banta won’t be thanking the event’s catering company. A vid made the rounds this week showing guests fleeing the rally in a panic after suffering from serious bouts of intestinal distress.
Lars Gonall: This vid starts with one of the more incredible moments I’ve seen in a while. A woman desperately pushes her way through the crowd only to stop dead in her tracks. Just when you and everyone around her begin to wonder why she stopped, you realized why she stopped. The look on her face is this incredible mixture of relief and regret.

Daisy Wences: I’m not normally a fan of gross-out vids, but the timing and angle of this one are impeccable.
Lars Gonall: Immediately after this poor woman’s failed attempt to maintain her dignity, the place descends into utter chaos. Some people begin to show similar symptoms, others are just desperate to get out of the way.

Daisy Wences: And what about that one guy who slipped and fell? Buster Barnhill himself couldn’t have done a better pratfall.
Lars Gonall: On a serious note, it’s hard to believe that all of this was because the crowd had a bad reaction to Banta’s controversial plan to completely eliminate citizenship… What? Don’t roll your eyes at me. I can do elevated humor too.

Daisy Wences: But seriously, the Banta campaign believes a bad batch of Thorshu crab legs caused the incident. The lavish food was meant to honor the famed “Thundering Thorshu” 78th Squadron who famously defied Messer regime orders to bomb civilian targets in Ferron. This incident obviously spoiled any chance that Banta had at claiming he’s also trying to protect the people.
Lars Gonall: It also gives a whole new meaning to “Thundering Thorshu.” Is that one more your speed?

Daisy Wences: There we go. That’s the Lars I know.
Lars Gonall: Turns out the whole thing ended in kind of a heartwarming way. One of the people attending was an ambulance pilot and actually had their Cutlass Red with them at the time. They were able to triage the people who got hit the hardest and provide care until more emergency services could be deployed.

Daisy Wences: Full salute to this generous and quick-thinking individual. If it wasn’t for the medical support they provided, this could have been a sad story instead of a hilarious one.
Lars Gonall: Speaking of sad stories, let’s talk about the rest of this year’s batch of Imperator wannabes! With Primary voting ending soon, thousands of eligible candidates will be whittled down to ten. We thought it’d be fun to watch a bunch of candidate vids available on the UEE’s official spectrum site to see who’s in the running.

Daisy Wences: I’d like to clarify that I was not looking forward to this. After watching a few, I knew I was going to hate every second of this and I did, I totally, totally did. I’m not even a Citizen, so it’s not like I even get to vote after all this hard work.
Lars Gonall: I loved this assignment. No matter how crazy or even crude these vids were, I was entranced the entire time. This just proved to me that anyone who wants to be Imperator and run this giant mess of an empire has to be a bit whacko.

Daisy Wences: And I was overwhelmed and a little saddened by all of it. Most of these ‘candidates’ have no chance of becoming Imperator and only want attention or someone to validate their weird beliefs. This felt like someone made a spectrum channel that only broadcasts recordings of crazy people screaming on street corners. You know, the folks we all politely try to ignore and not make eye-contact with.
Lars Gonall: They do need 50,000 Citizen signatures to qualify as a candidate and get their vid added, so whatever their message is, it must resonate with some people.

Daisy Wences: Guess I don’t think that collecting a few signatures from friends should be the main hurdle to entering the primary to be Imperator.
Lars Gonall: Wait, how many friends do you have, and why I have I only met, like, three of them?

Daisy Wences: You know what I mean. Becoming the Imperator is a huge deal and after watching way too many of these vids, I’m convinced that 99% percent of these candidates shouldn’t be allowed to run.
Lars Gonall: Well let’s get into it then. What candidate vids did you watch?

Daisy Wences: If you’re a civilian, like me, or never voted for Imperator before, you go to the official UEE election spectrum site, scroll through the list of eligible candidates, and watch vids for the ones that interest you, which meant I ignored anyone who looked even semi-normal.
Lars Gonall: Me too. Not that those candidates aren’t important, they’re just not right for this show. The first one that caught my eye was the girl wearing that cheap plastic helmet bag thingy.

Daisy Wences: Boss Baghead! I watched that one too. She went to a lot of trouble to make it look like she was literally a disembodied floating head.
Lars Gonall: She looked ridiculous, but I did love how serious she was about dedicating UEE resources to liberating Human consciousness from these restrictive “meat sacks” we currently exist in.

Daisy Wences: Wasn’t into it. Guess you could say her positions were a bit too heady for me.
Lars Gonall: Was that payback for the Thundering Thorshu joke?

Daisy Wences: Honestly, I was blown away by the creativity that went into the outfit and persona. It felt like there was more thought and care put into this dumb video than some of the spectrum shows we usually watch.
Lars Gonall: The more you talk about this, the more it seems like you actually enjoyed these vids.

Daisy Wences: Ok, fine. Some of this stuff was entertaining. I was expecting a lot of costumes in these vids, but I was surprised by just how many candidates thought it was a good idea to sing about their official positions.
Lars Gonall: Oh yeah, it’s great. Did you hear the thrash song about mandatory fecal recycling? I have a whole playlist now dedicated to singers that are also Imperator candidates. I’ll share it with you.

Daisy Wences: Please don’t. Did you watch the vid for Ivar Junior?
Lars Gonall: Is that the one you forced me to watch?

Daisy Wences: Oh yeah. I wasn’t going to be the only one to see that horror show.
Lars Gonall: Ughh, I’m not even sure we should talk about it. It’ll only give him more exposure.

Daisy Wences: No, it’s important to let people know that this process is messed up.
Lars Gonall: Ok, fine. The vid was of a candidate who claimed to be a direct descendant of Ivar Messer and ordained by birthright to be the next Imperator. I kinda tuned him out after that.

Daisy Wences: His positions are very detailed and just as horrible as you’d expect, like kicking out all Tevarin from the empire. This creep even looked like Ivar Messer. Can’t believe he got facial reconstruction surgery to look like that.
Lars Gonall: Sometimes I just don’t understand people.

Daisy Wences: Seriously, I don’t think it’s right that the Primary provides a platform for a candidate like that. Even if there’s no way he’ll ever gather the votes necessary to make the final ten, it still gave him a way to spread that hateful garbage.
Lars Gonall: I absolutely, 100% agree that that vid was vile, but I like that the process allows everyone’s voice to be heard. Like Golroq, the guy wearing that crazy suit with wings, who had a plan to end the Vanduul war by guiding the UEE into another dimension. Sure it might not work, but it’s not up to the government to decide what ideas are right or wrong. That’s our responsibility as voters.

Daisy Wences: I know this will sound weird coming from me, but it’s important to have standards.
Lars Gonall: Wait, did this week’s vids do something I once thought impossible… make us have a serious, adult conversation on the show?

Daisy Wences: Yes, ahhh, I hate it! When can we go back to talking about some nonsense where everyone lives together on a Phoenix and has to avoid getting a hot tub rash?
Lars Gonall: You’re still watching Love Liner? Didn’t you hate that show?

Daisy Wences: I still do. I just needed something to take my mind off those insane candidate vids.
Lars Gonall: I haven’t kept up, but now want to hear all about it. Is there really a rash going around?

Daisy Wences: That’s not all.
Lars Gonall: Ok, we need to take a quick commercial break, but when we return, we’re gonna take an unexpected detour to discuss Love Liner. I can’t wait to get an update.

Daisy Wences: And I can’t wait for this entire election to be over. We’ll have more Spectrum Spectator right after this. 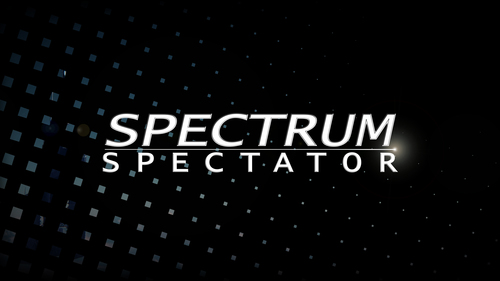