By 2516, the UNE had expanded into twelve systems. While jump-points and data relays allowed for quicker travel, to the systems on the edge, Earth was starting to feel quite far away.

Wei-Yin Song, one of the lead surveyors for the UNE’s Project Far Star, came across a discovery in a new system and drafted a message with an interesting idea.

As you know, my current assignment is to seek out and classify new systems for prospective terraforming and exploration. The latest system (342A) that my team and I have discovered is located in what can only be described as a confluence, a nexus. We have already discovered four jump-points in addition to the one we entered through with the possibility of a fifth on the horizon.

I am attaching a current map of the system in question with the zones still left for scanning as well as the already discovered jump-points. One of the planets (342A.03M) is a super-earth. Scans and scouting missions confirmed the presence of a naturally oxygen-based atmosphere, indigenous vegetation, vast oceans, and temperate climates. Deep in the southern region, a scout team discovered remnants of a rock formation, indicating that they were arranged that way but we have not discovered any indication of intelligent life.

In short, I would like to suggest that 342A.03M be established as a forward operating base for terraforming and expansion into the adjoining systems. The team has named the planet Terra to honor its similarities to Earth.

All of our current data and findings are included in this Comm-packet, I invite you to see for yourself.


The UNE Congress approved the plan to centralize Eastern system operations out of Terra. Over the years, cities grew and a new culture was born. 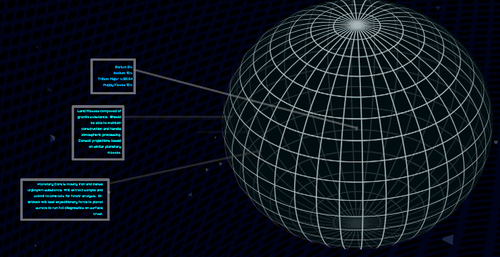