We’ve reached the $3.4 million unlock: the Goss System! At $3.5 million you’ll earn another system and learn more about the games’ docking mechanics. Let’s get there soon!

All three of Goss’ planets are inhabitable. The bulk of the system’s economy comes from tourism, but Gossians pride themselves on being self sufficient. Long-haul traders will find few bargains here, as the system produces little worthy of export and gathers its raw materials internally, mining and harvesting resources from the inner planets as needed.

The main destination is the lush, thriving resort world of Cassel (Goss II.) The surface is largely tropical rain forests dotted with stately pleasure domes constructed to support tourists and dozens of launch arcologies that house the descendants of the original Goss settlers. Goss I is a low-atmosphere world with abundant heavy metals. Scattered pockets of well-paid miners are a reasonable market for luxury goods and black market items, although the systems’ strict export policies prevent shipping raw materials out-system.

The Olympus Pool has dark side, too: the same nebula that delights tourists also acts as an effective curtain for several deep space pirate clans. Pirates are generally careful not to interfere in the tourism on Cassel… but the brilliantly colored sky is believed to hide multiple clan operations facilities and supply chain master points.

WARNING: gravity effects of the binary star have rendered portions of the system untenable to starships not carrying Level 7 shields or above. Consult current gravity maps before attempting transit!

Next, at $3.5 million: “Formerly the most distant UEE colony it grew to notoriety as the first contact point with the Vanduul. The attacks became so frequent that the settlers ultimately abandoned it.”

Here’s the Silver Citizen Card, which is included with pledges at the $250 level!Linking / Upgrading Pledges
We’re confident that most pledges from the backup site are now linked. However, we’ve also heard reports that a small number of pledgers have had issues with their upgrades not appearing correctly. Please contact Sandi if you are seeing either of these issues and she will update our database manually. 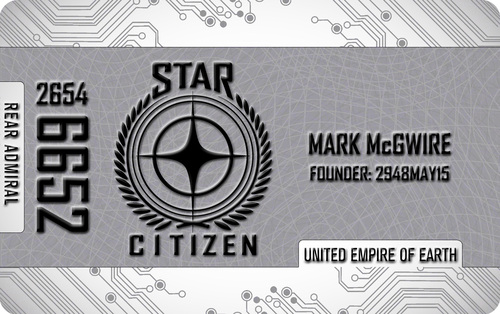