MARK KO: Glad to be here.

ERIA QUINT: At the start of this quarter’s session, the Senate officially opened discussions as to whether the UEE should attempt to establish relations with the Kr’Thak. They’ve been a hot topic since their existence was revealed late last year. Due to their tumultuous history with the Xi’An Empire, the issue has been a political and logistical minefield. So Mark, we’ll start out with the basic question: should the UEE attempt to contact the Kr’Thak?

MARK KO: Absolutely. Frankly, I’m stunned that the government’s just getting around to discussing this now. The Kr’Thak are a sentient, space-faring race and we know next to nothing about them. We should, at the very least, attempt diplomatic relations.

ERIA QUINT: Unfortunately, it’s not that simple. We’re not talking about the Banu or even the Vanduul. The Kr’Thak systems are on the other side of the Xi’An Empire. What are we going to tell the Xi’An? Hey, don’t mind us, we’re just passing through to try and broker a trade deal with your sworn enemy? I’m sure that’ll go over well.

MARK KO: They aren’t at war now. Why should they care? I think you’re being too dismissive of the Xi’An. Yeah, they have a long lifespan so there are still veterans of the Spirit Wars, but I think we can all agree that the Xi’An don’t run on emotion.

ERIA QUINT: Fine. So they won’t overreact, but won’t they absolutely see it as a strategic disadvantage to have two civilizations, one civil but tense and the other hostile, surrounding them?

MARK KO: Again, I think you’re underestimating the Xi’An. Sure, we aren’t the best of friends, but you’re treating them like it was the height of the Messer Era. I think it’s silly not to open up a channel of communication with another species with the hope of exchanging ideas, history, and culture simply because it might annoy the Xi’An.

ERIA QUINT: Well, sorry, but this is diplomacy. There aren’t a lot of opportunities for take-backs-

MARK KO: Are you serious?

MARK KO: Diplomacy is all about ‘take-backs,’ what are —

ERIA QUINT: Please let me finish. The Xi’An Emperor has repeatedly stated that the Kr’Thak are an enemy of the Xi’An. If we attempt to contact them, they are going to factor that into their relations with us, which will ratchet up their military presence along our border, even as a precaution, which will cause us to match them. Next thing we know, we’re back in a Mirror-State. And I’m still not hearing a solution, outside of sheer espionage, regarding crossing Xi’An territory to even get to the Kr’Thak.

MARK KO: So you’re suggesting that we just ignore them.

ERIA QUINT: Not at all. I think we should go through the Xi’An.

MARK KO: What do you mean?

ERIA QUINT: We let the Xi’An know our intention to contact the Kr’Thak. Make them part of the process.

MARK KO: You said yourself that Emperor Kr.ē regards the Kr’Thak as enemies of the Xi’An Empire. You really think they’d go for that?

ERIA QUINT: Maybe. Maybe not. But it’s one way to communicate without alienating them. Who knows, maybe it’ll help smooth relations between the two of them.

MARK KO: I don’t know. It sounds like you’re opening a large window of opportunity for the Xi’An to compromise diplomacy.

MARK KO: Well, if you’re using them as middlemen and it’s in their best interest to keep us from establishing a beneficial relationship with the Kr’Thak, why wouldn’t they manipulate the situation to their advantage? Hell, I’d be shocked if they didn’t do that.

ERIA QUINT: But it’s a solution to the astrographic issue of their location.

MARK KO: I suppose, but it’s naïve to think that the Xi’An will forget centuries of war and animosity and suddenly play nice.

ERIA QUINT: It’s better than no contact at all. [PAUSE] We’re going to take a break. When we come back, controversial lobbyist Cornell Mars will join us. Mars made headlines recently with his ‘unique’ perspective on the Kr’Thak situation. So join us as we reload for another Showdown! 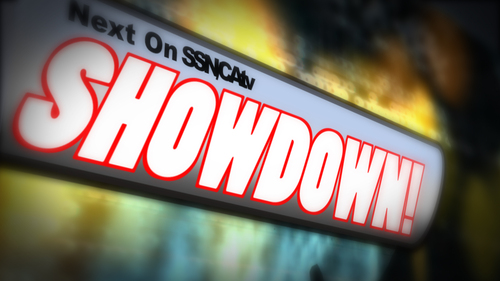