This portfolio originally appeared in Jump Point 5.8.
As space travel became more and more common, ground vehicles began to be regarded as strictly utilitarian. To many people, land vehicles took you where you were going, but it was space vehicles that took you to places you’d never been. This meant that by the 25th century most kids didn’t dream about owning a racing sled or all-terrain rover; they dreamed about their first spaceship.

Rough & Tumbril Beginnings
Kavya Crosby grew up in a small settlement surrounded by Yar’s vast Red Desert. Consisting of a landing pad and a few small outposts, the settlement had originally been built to monitor the planet’s terraforming process. After the terraforming was complete, it was abandoned and slowly subsumed by the sand until 2501, when the University of Saisei restored the site as a research center and hired Crosby’s parents to run the facility’s landing pad. Already a few weeks overdue, her parents joked that Kavya refused to be born until they’d settled on the planet in 2503.

Being an only child, and one of the settlement’s few permanent residents, provided Kavya with a unique childhood. When not being tutored by the professors stationed at the settlement, she helped her parents fix machines tormented by Yar’s fine red sand. It was this harsh environment that taught her the value of protecting precious equipment from the elements.

In 2518, Aaron Douze arrived at the outpost with his mother Meredith Douze, a biotech specialist intent on engineering a crop that could survive Yar’s treacherous biome. As part of her research, Meredith established numerous grow sites outside the settlement to test her crops under different conditions, and was required to visit them often. Then, one day, she never returned from her rounds.

The settlement mobilized to find her, but a raging sandstorm made it impossible to search in even the toughest land vehicles. Luckily, Crosby’s parents had taken the precaution of modifying an old Crossfire LandCruiser for such situations. Since Aaron was familiar with the location of each site, he joined Kavya and her father on the search. They found Meredith unconscious and half buried in sand at the bottom of a narrow ravine. If they had waited out the sandstorm, it probably would have been too late to save her.

After this experience, Aaron spent more and more time in the landing pad’s maintenance hangar with Kavya. He was curious about the Crossfire and the upgrades they had made so it could survive the planet’s harsh conditions. Aaron’s growing interest in ground vehicles wasn’t the only thing that kept bringing him back to the hangar. Romance blossomed between the teenagers, and despite him returning to Saisei with his mother shortly after his 17th birthday, the two remained close, continuing to exchange comms over the next few years.

When it was time for Kavya to attend college, it was an easy decision to join Aaron and study at the University of Saisei. She earned an engineering degree while he studied business. After graduating, the two wed and landed high-paying but unfulfilling work in Fujin City. Together, they talked about doing something different, but the comforts afforded them by their cushy jobs were hard to give up.

Eventually, they were drawn back to Yar for an extended period due to the health of Kavya’s aging parents. After only a few weeks of tending to them, both her mother and father passed away within days of each other. While packing up her parents’ possessions, the two came across the old Crossfire under a dusty tarp in the hangar. Most of the components and several panels had been removed, leaving only a skeleton of the cruiser the two remembered so well. Company legend claims Aaron asked Kavya, “What do we do with this?”

Her response sealed their fate: “Let’s make our own.”

Getting Off the Ground
Years before, they had spent many an afternoon in the hangar debating what they would do if they could build their own vehicle, as they had seen many of the outpost’s rovers fail in the face of the planet’s terrain and atmospheric conditions. Dissatisfied with their lives on Saisei, here was a chance to build a range of tough, fast and durable ground vehicles for the public to use during planetside exploration.

The two were hired on as the new landing pad operators on Yar, and spent their off hours constructing a rig. In a nod to the fact that they borrowed much of their starting materials from an old loader cart, they started referring to their design as the tumbril. Their initial prototype turned out to be so promising that the University, after spending huge amounts of credits repairing failed vehicles over the years, agreed to give them a grant to pursue their designs. Working on it full time, they had a fully working production model by the end of 2535. Tough to the extreme and rugged enough to easily handle even the weather on Yar, the formidable vehicle didn’t reveal its best feature until they got behind the controls. It was a lot of fun to drive.

With their University contacts, Kavya and Aaron were able to incorporate Tumbril Land Systems in Saisei during 2536. Their first commercial vehicle, the DX20, was released later that year but unfortunately failed to make much of an impact on its initial release. Kavya and Aaron were disappointed but undeterred, convinced that Tumbril only needed time to find its market. Their instinct would be right, but what catapulted the company into the mainstream was most unexpected.

In 2541, war erupted shortly after Humanity encountered the Tevarin. Faced with their first inter-species conflict, the UNE suddenly realized they lacked the proper vehicles for ground-based operations, and the military scrambled to find a solution. Ground vehicles from all current manufacturers were put through rigorous field tests. The results weren’t even close.

Tumbril’s DX20 was so well designed that they were combat ready with only minor modifications. Tumbril landed a massive military contract, and quickly scaled their operation to meet the demand. They were even asked to create new designs for the war effort. It wasn’t long before Tumbril tanks began to roll off production lines.

The First Tevarin War elevated Tumbril into a trusted and beloved brand. Soldiers raved about the DX20 and this reputation led to skyrocketing civilian sales following the war. Once again, the company continued to expand to meet demand. Decades of sustained growth turned Tumbril into the preeminent producer of ground vehicles for both the public and private sectors.

Gone But Not Forgotten
Kavya and Aaron actively ran Tumbril until both were centenarians. A decade after the Second Tevarin War, the two finally retired and relinquished control to their board of directors. Incredibly, the ensuing two centuries were as successful as the first. It was during this period that Tumbril introduced numerous legendary ground vehicles, like the Nova, Timura and C-series.

However, towards the end of the Messer regime, budgetary concerns made the military prioritize new spacecraft over ground vehicles and led to the reduction of contracts with Tumbril. Though the lost income impacted their bottom line, many board members saw this as a blessing in disguise since public opinion towards the ruling family and their associates was turning sour. The company’s contracts were further reduced once the Messer regime fell and the new UEE government diverted resources to sectors long neglected.

The significant reduction in government contracts forced Tumbril to find more profits in the private sector. Eager to increase their market share, the board pushed a series of designs through before they had been subjected to the rigorous in-house quality assurance protocols that had been in place for decades. A string of unpopular new vehicles, combined with the disastrous decision to use cheaper materials to reduce production costs, finally tarnished the Tumbril brand beyond repair for a generation of consumers.

During the 2850s, the company burned through numerous CEOs in an attempt to pull Tumbril out of its death spiral, but it was not to be. In 2862, despite still having a few lingering government contracts with planetary surveyors, the company declared bankruptcy. Tumbril was shuttered and the brand seemingly destined for the dustbins of history.

It would have stayed there if not for Terrence Naban. The charismatic entrepreneur partnered his investment firm, DevCo Group, with numerous outside investors and bought the defunct Tumbril brand in 2941. Much like the company’s founders, Naban loved ground vehicles and believed the marketplace was underserved, so he made a radical decision to resurrect the Tumbril brand. He believed that restoring its name would be a more effective way to reach customers than launching a new brand, particularly since original Tumbril vehicles had become collectors’ items over the previous decades. There were even still original C-series being used by homesteaders on some of the more remote frontier worlds.

If the recently announced Cyclone series is any indication, Naban seems intent on delivering on his promise to restore Tumbril to its former glory. No expense was spared to hire talented designers and engineers to breathe life back into the brand. They started simple by producing a single model of the Cyclone and outfitting it with four variants. According the Naban, their goal was to get one vehicle done right, then expand from there.

Eighty-five standard years after Tumbril folded, it’s back. The UEE’s ground vehicle of choice for centuries has been given a new lease on life thanks to Naban. As a sign of how much he cares for the brand, Naban has named himself Tumbril’s CEO and made it his personal mission to bring the brand back to relevance. If Naban can return the company to its roots, then Tumbril Land Systems appears ready and willing to crest whatever subsequent obstacles might appear over the horizon. 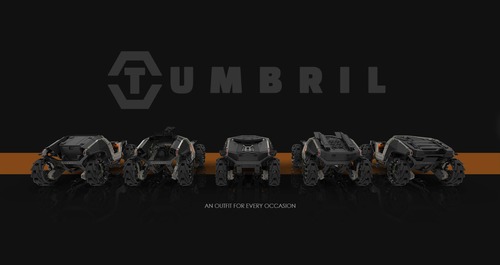