This portfolio originally appeared in Jump Point 7.2.
The Rust Society is an organization of scrapyard veterans and long-haul philosophers dedicated to mentoring the next generation in the “right” way to salvage and haul. Focused on improving the local community and providing perks to its members, chapters exist in most UEE systems and many unclaimed ones.

Franklin Yeung, known by his callsign “Knocks”, downplayed his role in creating the Rust Society. Yet, there’s no denying that the organization would not exist without him. Five centuries after the first official meeting, Knocks would be shocked to see what the Rust Society has become and undoubtedly heartened to know that it has helped so many.

Forged By Failure
Franklin Yeung emigrated to Caliban in the late 24th century. He operated as a solo hauler but struggled to find consistent work. Although he spent his days scouring job boards, his best gigs came recommended by a grizzled group of pilots that frequented a local dive bar called Delilah’s. Knocks became a regular, earning a nickname for his erratic balance when drinking. He referred to these informal gatherings as “meetings with the Rust Society”, a homage to the potent brand of alcohol regularly consumed en masse by attendees.

As older members either moved away, retired, or died, Knocks became the group’s respected veteran. A willing mentor and a veritable fountain of Caliban knowledge, he freely shared information about what shipping lanes were safe or which scrapyards used rigged scales. He also provided work to struggling youngsters, even when in need of creds for himself. To compensate, Knocks took more lucrative but also more dangerous runs into Oberon. On a haul in 2436, he barely survived an attack by outlaws. Knocks made a full recovery, but his extensive injuries and age made subsequent long flights in the pilot’s seat painful. After canceling three consecutive contracts, he retired, never to fly another hauling gig again.

Knocks took a comm-ops job at a local hangar and realized the information he got from those coming and going could be put to good use. He continued holding court at Delilah’s and ushered in a new era of the Rust Society, hoping that this new gathering would continue to support the next-generation of long-haul travelers. Within five years, Knocks had quit his job to focus entirely on the Rust Society. Delilah’s couldn’t house the meeting’s growing popularity, so Knocks found an alternate venue, though associated costs forced him to charge membership dues. This expansion allowed them to establish mentorship programs, publish weekly system security reports, use their influence to boycott businesses that exploited haulers, and more. It quickly became an essential institution for independent contractors in Caliban.

Since its members took jobs throughout the empire, it wasn’t long before Rust Society chapters appeared in Oberon and Nul. Personal experience had taught Knocks how hard it was to gather accurate information about these lawless systems and he hoped these new chapters would keep others safe from suffering his own fate. Knocks ensured that all chapters shared information and that membership in one meant membership in them all. Knocks ran the Rust Society until failing health forced him to step down in 2477. He remained a resource to its brain trust and a mentor to younger members until his death two years later. An apocryphal story claims that Knocks’ funeral ended only after all the Rust on Crion was consumed. Though local members associated the organization with its founding member, Knocks ensured that it would survive without him and the Rust Society remained an important regional organization for decades. That changed in 2541 when Humanity encountered the Tevarin and found itself involved in the first inter-species war.

Encouraged Expansion
The First Tevarin War struck fear into the heart of Humanity. Relatively safe systems suddenly become battlegrounds and secure supply lines Tevarin targets. While the military recruited haulers to the Merchant Navy to shore up their supply chain, civilians found themselves lacking basic necessities as many pilots avoided deliveries to Tevarin-threatened systems. Rust Society members stepped in by hauling food to heavily rationed communities, organizing escorts for civilian haulers, and patrolling shipping lanes to ensure their security. These operations so impressed military officials that, after the war, they approached the Rust Society and advocated for its expansion. The society doubled in size over the next five decades. However, it was the Second Tevarin War that truly turned the Rust Society into an empire-wide institution.

The Tevarin’s use of asymmetrical warfare meant that no system was safe. Everyone, military and civilian, were targeted. Rust Society members once again kept the civilian population fed and cared for during the brutal seven-year war. They were so invaluable that the government poured money into their coffers to aid operations and accelerate their expansion.

Political Problems
The Second Tevarin War brought the Rust Society to the attention of the entire empire, with soldiers returning home looking to join or establish chapters in their own systems. The Rust Society waived the initiation and first year’s membership fee for veterans and instituted special work and mentorship programs. These initiatives returned millions of vets to the workforce.

As Rust Society membership swelled, chairperson Gordon Disalvo saw an opportunity to benefit independent contractors across the empire. The group spent significant credits to lobby for new laws that pushed tax breaks and less regulation for independent operators. By the late 27th century, Rust Society membership dipped for the first time. Their engagement with political figures forced many to leave due to the association with the oppressive Messer government. Meanwhile, a growing coalition wanted to ban members from taking government contracts, which angered those relying on them for their livelihood. In their eyes, the Rust Society was about expanding options for independent contractors, not restricting them. This created a huge rift within the organization between pro and anti-Messer contingents.

A riot during the group’s 2692 conference forced Rust Society officials into action. They stopped lobbying and instituted a policy that political matters would be handled by local chapters. Empire-wide lobby efforts would only occur if approved by 2/3rds of the chapters. Ever since, the Rust Society has remained a mainly local organization and left policy to the politicians.

Unsung Heroes
For over five centuries, the Rust Society has made life better for its members and the UEE. This shifting collective of haulers and salvagers share valuable insider information on systems, such as profitable trading routes and dangerous areas. It allows members to support themselves and provide services to locations ignored by corporations or deemed too dangerous or unprofitable. Members often sport armor, outfits, and gear decked out in red and tan to symbolize their affiliation. Alone, each member is an independent contractor, but together their vast network of knowledge and expertise makes Rust Society members so much more. 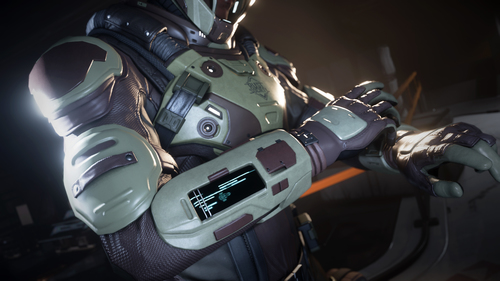