This short story originally appeared in Jump Point 8.04.
Kaseem suddenly knew why the Grevolas let him make this delivery. He was bait. A distraction meant to draw the Overlords away from the ships doing the real run of maze. He kicked the open crate of worthless wood chips across the cargo hold before hurrying to the cockpit, briefly stumbling as another blast shook the Cutlass. He disengaged the autopilot and vented the cargo hold. The decoy crates ejected from the ship and spiraled towards Pyro II’s atmosphere. They were gone in an instant, much like Kaseem’s dreams of this delivery earning him entry into the Grevola pack.

He watched the radar with bated breath, but the Overlords didn’t divert. They clearly didn’t care about the haul of “drugs” now hurtling through atmo. They had their eyes on him. Kaseem had only recently arrived at Ruin Station, but even he could feel the fear and anxiety caused by this mysterious crew systematically capping outlaws. “Kill on Sight” posters featuring photos of the Overlords’ colorful armor were plastered across the station with increasing frequency, desperation, and credit rewards. Still no one knew who they were or what they wanted. Some believed them to be a UEE Marine black-ops team sent to clean up the system. Others thought they were merely outlaws making room for their own operations. Right now, Kaseem didn’t care either way.

Kaseem had traveled to Pyro to make some serious credits. Unlike most of the scattered inhabitants of the system, he wasn’t on the run. Weeks earlier, his parents kicked him out after they had heard the rumors about local establishments being held up by someone looking like him and packing a Salvo pistol; the same make and model as the one strapped to his side. He tried to justify it as nothing more than some extra grift. Although no one got hurt, his father was inconsolable and unable to speak, so his mother delivered the devastating news.

He left in a rage. At first he dreamt of returning only when he could buy the entire building of flats that his parents lived in, so they’d have to slave away to pay him rent every month. Now all he wanted was a peaceful night’s sleep with the smell of his dad’s simmering boumbo floating down the hall.

On the drift and with no place to call home, Kaseem grew desperate enough to use the very last of his money to make the jump into Pyro. The system had a reputation for being the place where credits could be made for those willing to fight for them. Its most popular LZ, Ruin Station, was far from a welcoming place. Kaseem felt like every pair of eyes was calculating how much he was worth and if it was higher than the cost of a bullet to the head. He ate his first meal there with one hand tightly gripped around his pistol. Three days in he met the closest thing to a friendly face, a recently arrived hauler who made a living doing regular runs between Stanton and Pyro. She peppered him with probing questions then invited him to meet a few friends. It was just his luck that they turned out to be connected. A local pack on the lookout for someone unaffiliated to do a heavy run. Prove he could handle it and the Grevola clan would welcome him as one of their own. Then the credits would surely flow in. At the time, Kaseem couldn’t believe his luck. Now, he knew the truth.

Warning sensors shrieked as the Cutlass’ shields absorbed another brutal barrage. It wouldn’t be long before they were gone. Kaseem cursed himself for being so stupid. Why didn’t he double check the crates? Or think twice about why they were so eager to have a random stranger pilot this Cutlass?

Kaseem launched a chaff to shake a missile and couldn’t help but smirk. His dad said all those hours in Arena Commander were a waste. That sure proved to be wrong; a fact he hoped to one day be able to share with him in person.

He made a sudden evasive turn then started scrolling through the flight logs to look where this ship had been. Laser shots flashed by the cockpit as his pursuers adjusted course. His remaining shields began to flicker. He found something. Only one set of Pyro II coordinates appeared more than once.

The ship rocked from impacts. His shields had gone. Kaseem had to do this fast. He pulled up the coordinates then paused. There was only one way to guarantee the Grevola would get what they deserved.

Kaseem switched screens and broadcast a quantum linking signal. Overlord ships locked on lickety-split. Away they went, around to the far side of Pyro II. Eventually the ship kicked out of quantum.

He dove through the atmosphere, flames licking around the Cutlass as the ships hot on his tail followed closely behind. His eyes frantically searched the inhospitable terrain pockmarked by defunct mining operations below, praying he hadn’t been wrong. Then, on the horizon, he saw light glinting off the sleek hull of a Freelancer. He angled his ship and soon could make out tiny figures scurrying between the ‘Lancer and a busted up building sitting on the lip of a deep mine. That had to be the Grevola hideout!

Kaseem spiraled away from the heavy fire peppering his tail and then loaded his last missile, hoping to avoid the Overlord pursuit for just a few more seconds. Enough time to not only get inside effective range, but so damn close the Grevola would know it was him.

Kaseem screamed along as he launched his last missile at the Freelancer. It exploded into a blinding fireball that illuminated the Cutlass’ canopy. A few of the surviving turrets that perched on the edge of the mine opened fire. He wasn’t bothering with evasive maneuvers anymore. At this range there was no point. His HUD lit up with warning after warning of critical system failures moments before the world slammed to black.

Minutes, maybe hours, passed. The first thing Kaseem remembered was searing heat. Then light. Someone pulled him from the wrecked ship. It took moments for his eyes to adjust and see through the throbbing pain in his skull. When he focused, he looked up at a circle of armored faces.

The entire gallery of Wanted posters was looking down at him.

Kaseem doesn’t know why, but he laughed. The Overlords exchanged a glance.

He gave them a thumbs up then blacked out.

Kaseem came to behind bio-waste crates stacked in a Ruin Station corner. He struggled to his feet to see a “Kill on Sight” Overlords wanted poster taped to his chest. He smirked then slowly made his way to the space port. It was time to find a way home. 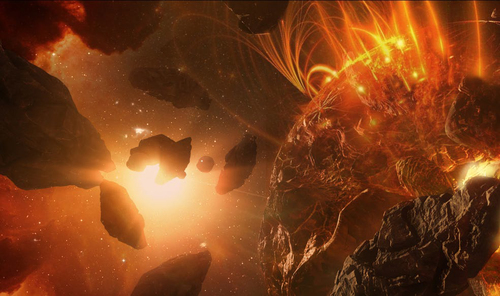