I would like to take a moment to talk about another crowd funding project, Golem Arcana from my friend Jordan Weisman. Like Star Citizen, Golem Arcana is a concept that publishers would find too risky… and so Jordan is sharing his vision directly with the world.

You may not know this, but before making video games consumed my life I was a genuine tabletop enthusiast. Roleplaying games like Dungeons and Dragons and Traveller, war games like Squad Leader and military miniatures from the past to the distant future. I still have the complete battle order of the Battle of Austerlitz in gloriously painted 15mm miniatures! Tabletop gaming is something I have always loved, and something I have always looked at for inspiration. One of my goals in game design is to combine the rigid systems of rules found in tabletop systems with immersive qualities that make them invisible to the player.

When I started making “Squadron,” the game that became Wing Commander, my first idea was to make a top-down 2D space battleship sim. When I’m working on a game I always immerse myself in inspiration from all forms of media. For Squadron that meant sci-fi movies, books and board games. In addition to Traveller, Star Wars and the original Battlestar Galactica television series, an inspiration during the project was a tabletop game called Renegade Legion: Interceptor from FASA, Jordan’s pen-and-paper gaming company. Interceptor was part of what convinced me that flying space fighters instead of moving around battleships would be more fun.

A few years later, I met Jordan and we became friends. We bonded over our mutual love of science fiction and gaming in general. I have always admired his creativity and his ability to think outside the box. One of Jordan’s geniuses is his uncanny ability to revitalize established concepts by merging them in new and unexpected ways. He turned MechWarrior into an entertainment destination (we talked about doing this for Wing Commander!), he combined gaming miniatures and CCGs to revitalize tabletop games for younger audiences… and now he has an idea that will combine the miniature gaming experience with the latest technology.

What Golem Arcana aims to do is combine the joy of table top gaming with technology that eases the pain of manual bookkeeping. It’s blending the pure mechanics of miniature gaming with the conveniences that the digital age allows. Interest in miniatures games has fallen off in recent years and Golem Arcana could be just the ticket to revitalize it. There’s endless potential to bring in younger audiences put off by the measuring and score keeping required by classic games and to interest older players who no longer have the time it takes to dedicate themselves to the upkeep of a tabletop game.

Golem Arcana is not a safe project, a familiar IP, that can rely on nostalgia or a game like Star Citizen that evolves from past work. At the same time, that’s the potential power of crowd funding, to bring new ideas directly to an audience that can appreciate them. I wanted to help get the word out because tabletop gaming is a niche genre that doesn’t get the attention of a major video game campaign. If you, like me, have a soft spot for this kind of game (or just want to support something totally new!) then I encourage you to view the Golem Arcana trailer below and check out their Kickstarter campaign. 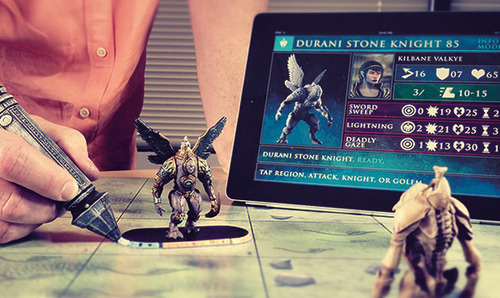