The Endeavor
The MISC Endeavor is one of the most unique ships in the Star Citizen universe and the ultimate embodiment of the game’s guiding philosophy to allow players the freedom to choose their own path.
Its signature feature is a modular architecture that allows for an unprecedented level of customization of the base functionality, allowing the ship to fulfill any of a variety of different roles. The ability of an authorized dealer to promptly retrofit any of the three attachment points for a nominal surcharge means that owners will have the flexibility to quickly and cost effectively make large, sweeping changes to the core functionality of their ship, and thus much more easily shift from one occupation to another as often as they desire.

The ID Beacon
An ID Beacon is a signal containing various bits of information that may either be broadcast from a ship offering a particular function or a player or ship requesting a specific service. The location of the ID Beacon and its associated information can be selectively superimposed on a ship’s navigational map of the local solar system, such that only those signals of interest are visible.

A player that had to eject from the smoking remains of their ship might enable their personal ID Beacon and designate what they’re willing to pay for their rescue, and another player with a ship capable of retrieving an ejected pilot and listening for such signals would see it and have to decide whether or not the payment being offered is worth the effort and, assuming the stranded player was in a potentially dangerous area, the risk.

The Medical Module
The Medical Module outfits an Endeavor with all of the equipment necessary to heal any injury or cure any illness that one might encounter while traveling from world to world. That alone guarantees that an enterprising player maintaining a presence in a popular area of space ignored by other Endeavors will see a brisk demand for their services. Medical Modules, however, fulfill an even more fundamental role within the service ecosystem – they act as remote spawn points for both players and some smaller ships.

When a player dies, they have the option of respawning at any landing zone equipped with a hospital for a minimal charge. Alternatively, one may inspect the prices being offered by all nearby Endeavors equipped with a Medical Module that have activated their ID Beacons to determine whether a remote spawn into that ship – a concept that will often allow you to get back into the action a lot faster – is warranted. After a player has respawned into the hospital section of an Endeavor, they are granted access to a waiting room where they’re able to order any of several smaller ships that will fit within the Medical Module’s Hangar Bay. The Endeavor’s owner has to pay a premium for the rapid and remote delivery of such ships, and in turn is able to dictate the amount of profit that they require. Upon arrival of the ship, the respawned player – and any of their party members that are also residing within the waiting room – may enter the Hangar Bay, board the new ship, and continue on their way.

Most organizations will want at least one Endeavor in their armada, and will want to keep it nearby – but at a safe distance – when combat looms.

The Organics Module
The Organics Module allows for various forms of plant life to be grown in a tightly controlled environment and harvested for profit. The basic requirements for farming are soil, fertilizer, seeds, and water, all of which can be purchased at garden supply stores that will be located in most major landing zones or, in some cases, mined or otherwise extracted from the environment.

Farming is a labor intensive process that requires a fairly meticulous attention to detail. There are two parts to the basic puzzle: ascertaining exactly what a particular plant species requires in order to thrive, and giving that to them at the appropriate time. The variables include the quality of the soil, the type of fertilizer, the temperature, the amount of water, and the type and quantity of radiation.

An Organics Module consists of two Biodomes, each of which consists of multiple discrete sections – gardening beds – where different species can be planted. Each section has growth lights above it, and a command console that allows the type and quantity of radiation to be specified and the application therefore automated. The temperature of a Biodome – but not the individual sections – can be specified, so if multiple species are grown alongside one another it’s best to ensure that they have similar tolerances with regard to temperature. The application of water, fertilizer, and the harvesting of the plants is done manually.

Many of the sturdier plant species will grow and prosper in standard, run-of-the-mill soil with a basic nitrogen/phosphorus/potassium fertilizer, a temperate climate, a moderate amount of water, and 8-10 hours per day of standard radiation from the growth lights. In order to reach their full potential, more exotic – and lucrative – species may require a higher quality soil, a specialized type of fertilizer, warmer or cooler temperatures, more or less water, and a particular type and quantity of radiation.

Each species of plant is effectively a puzzle, and the job of a farmer is to figure out the optimal solution in order to produce the highest quality plants at the lowest price. Most plants are valued for their end result – the fruit or vegetables that they produce, their use as an herb or spice, their fragrance, or a medical compound that can be extracted. Some, however, are valued simply for their appearance. While some of these outputs can be preserved for extended durations, others have a very short shelf life, and must be delivered to their destination soon after having been extracted or else their value will diminish appreciably.

A productive farmer that focuses on the basics will often be able to earn a solid living, but the most profitable opportunities in this field will revolve around figuring out how to grow more exotic species that are notoriously difficult to reproduce, but for which there is high demand and very limited supply. Attaining such mastery will not come easily or cheaply, as short of procuring the elusive and expensive seeds oneself the repeated trial-and-error sessions that will be necessary will cost a small fortune.

Features inevitably evolve over the course of development, and one of the more interesting ones currently under consideration is whether or not some sources of radiation – critical for the development of some of the more valuable types of plant life – might be cost prohibitive to artificially generate, and thus players might have to seek out natural sources within a given solar system. Some species might respond favorably to being bathed in a star’s corona, which would tax the shielding of a ship to its limit, and others to the soft glow of a nebula, which would likely attract others that would seek to control such a valuable piece of real estate.

The Discovery Module
The Discovery Module is geared towards the aspiring astronomer. It contains a powerful 16-meter telescope mounted on a rotatable base that is capable of scanning the Heavens in the infrared, visible, and gamma spectra as well as dual ejection ports for an array of long-range probes. Wayward comets, asteroids fields rich in valuable ore, derelict ships worth a fortune to a salvager, and primordial black holes that are the Holy Grail of scientific research are just a few of the things that a patient observer might eventually discover.

Detection of something of interest typically consists of selecting an area of the sky and slowly searching for anomalies. An object that appears to be nothing more than another in a dense sea of stars might eventually reveal itself to be something different via its ever-so-gradual motion against the static backdrop. Alternatively, an object might emit a radiation signature that suggests something out of the ordinary, or in the case of a large field of asteroids its most detectable aspect might be the fact that it blocks a portion of a background star’s radiation, which might be noticed by the slight twinkling it imparts upon the light from that particular star.

Increasing the magnification of the telescope can often help ascertain what an object might be if not always what it definitively is. Such adjustments, however, take several seconds to perform and, additionally, any increase in magnification implies a commensurate decrease in the field of view, which means that scanning the entirety of the sky at a high magnification isn’t particularly feasible within a reasonable period of time. Thus, the ability to discern subtle clues at a higher level of magnification that indicate a fair probability of finding something of interest if one were to probe deeper into the cosmic tapestry with the Endeavor’s telescope is one of the most valuable abilities a Discoverer can learn. When coupled with a methodical approach to analyzing a volume of space, a regular stream of discoveries – and a steady source of income – is all but assured.

While some objects – comets in particular, with their long and wispy tails – can be definitively identified if viewed at sufficient magnification, others will require a long-range probe to be dispatched in order to attain such certainty. Once a positive identification has been made, a Point of Interest representing the discovery will appear on the player’s navigational map of the solar system. At that point, the information can be shared with other players or sold to an information broker.

Additional Modules and the Future
Several other modules are on the conceptual drawing board, including a Crew Module that would allow for additional living space and amenities to be outfitted within the ship, and a Fuel Module that would allow the travel range of the vessel to be extended considerably. A ring-shaped Supercollider Module would enable incredibly precise adjustments to be made to the core components of various weapons and thrusters, thus allowing players to enhance the default capabilities of some items. This could enable a competitive edge versus others outfitted with off-the-shelf equipment, or simply serve as another form of income generation, as some store owners would be extremely interested in procuring custom items that perform better than their retail counterparts.

Other modules are under consideration for potential future development, including a Defense Module that would provide an Endeavor with a diverse array of defensively-oriented weaponry that would greatly improve its chances of escaping a dangerous confrontation with minimal damage. In conjunction with a Medical Module this would allow Endeavors to traverse deeper into dangerous areas, providing other players with valuable respawn points and the owner with an exceptionally lucrative stream of income.

Finis
The extraordinary level of customization possible as a result of the Endeavor’s modular design will allow players the most comprehensive opportunity yet to construct a multi-purpose ship according to their own precise specifications. The ability to retroactively and cost effectively alter that design – by swapping out modules at a later date – will enable owners to quickly shift between different economic pursuits depending upon the most attractive risk/reward opportunity at a given moment or simply their whim, which is a dramatic departure versus other ships with a fixed purpose.

The Endeavor means different things to different people. For some it’s a mobile hospital, able to provide aid to others in desperate need. For others it’s a way of bonding with nature, or of providing food to a hungry population. The curious or aspirational may see it as a platform for discovery, a means of intellectual adventure or a private window into the Heavens themselves. The Endeavor is all of these things, and more. Ultimately, the Endeavor means freedom – the freedom to choose your own unique path, and the freedom to change your mind. 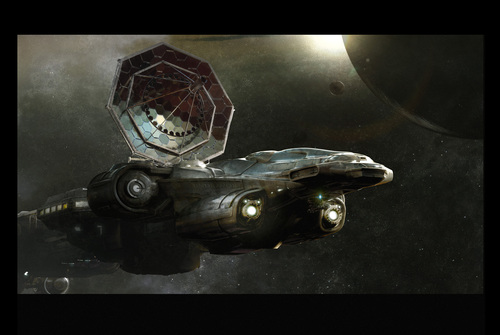